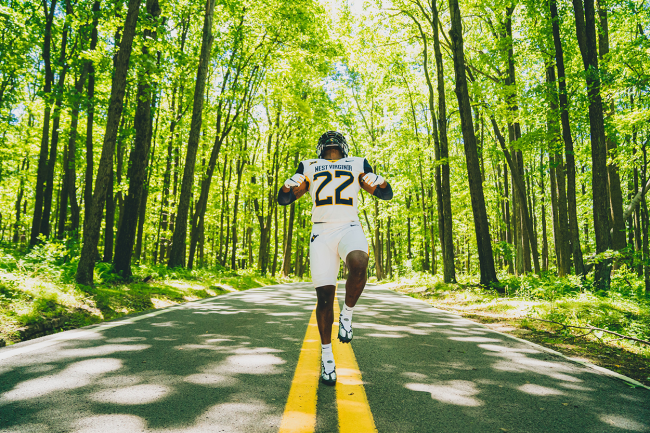 As West Virginia football looks ahead to Week 1, it has a very big opponent in its path. The Mountaineers are set to renew the fourth-oldest rivalry in college football by playing the Pittsburgh Panthers in the 2022 edition of the Backyard Brawl.

When they do, they will be wearing the best new uniforms of the year.

On Monday afternoon, which just so happened to be West Virginia Day, the program dropped its new ‘Country Road’ uniforms. They are extremely intricate and absolutely beautiful.

When the team saw what it will be wearing on September 1st, the players lost their minds.

And rightfully so, just check out these lids. The rest of the uniform is equally as unique and it does not have a single detail missing.

Not enough 🔥 emojis for these pic.twitter.com/tPcQoWSSJF

Obviously, this new kit has been in the works for some time. It can’t be created overnight.

The same can be said for any accompanying media. West Virginia’s videography and content team has been working on its release video for a few weeks and it took a lot of secrecy to keep the public from getting a glimpse at the new uniform.

The shoot, which was held in the middle of a busy public road, is as eye-catching as the uniforms themselves. But it wasn’t easy.

Every time a car came driving by, the West Virginia media team had to quickly stop what they were doing and cover the new Country Road uniform.

The looks we got while shooting this reveal were priceless 😂

Absolutely worth it, though. Apologies to the group of cars we held up trying to get to a wedding… https://t.co/tJCqbb3suo

A behind-the-scenes look at the shoot from the perspective of West Virginia assistant athletic director for creative and digital provides a hilarious look at the process. It was rather chaotic.

In the end, Bollinger and his staff’s efforts paid off. The uniform stayed a secret and the video is awesome!