The Last Play Of Western Michigan Vs. Ball State Was Utter Chaos After Both Teams Prematurely Rushed The Field And The Broncos Scored 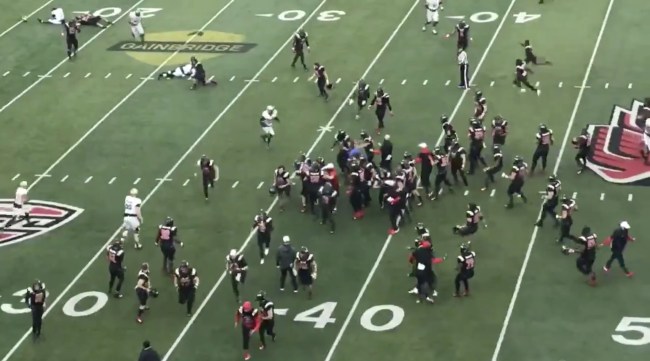 MACtion never fails to bring the craziest college football moments week-in and week-out. On Saturday, in a battle of 4-1 teams, Western Michigan traveled to Ball State and nearly pulled off a miracle on the most wild play of the season, if not all time. Facing a three-point deficit with one play left in the game, the visitors resorted to the classic desperation play that has become common place in the final seconds of down-and-distance that doesn’t allow for a Hail Mary attempt.

Kaleb Eleby took the snap and began the possession with a forward pass across the field. From there, seven backwards laterals left a lone Bronco with the ball at his own 20-yard-line. It appeared as though the ballcarrier was brought down and the play was over, resulting in the end of the game. The Cardinals sideline erupted in celebration and rushed onto the field and their opponents slowly came off of the home sideline to shake hands. But the play wasn’t ruled dead!

The tackle resulted in a fumble, Western Michigan recovered and ran it through the mass of people to reach the end zone. Had the play counted, it would have been the game-winning touchdown.

However, the play was called back (boo) and the score was overturned. It would have been a lot cooler if it counted, but there were clearly a few questionable lateral passes in the mix that couldn’t be allowed to stand. Ball State went on to win the game and division title after Western Michigan was penalized for an illegal forward pass.