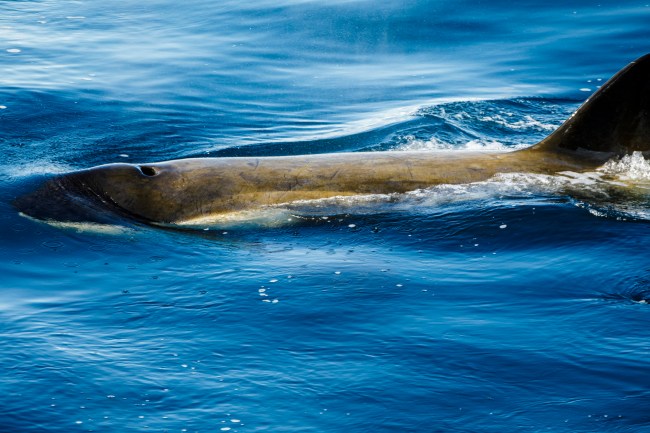 Australia’s seasons run opposite to those in the USA which means they’re mid-way through Spring and already looking towards Summer right now with clean waves hitting the Gold Coast and perfect weather rolling in. Spring is also a big migratory season for whales and surfers in Byron Bay were shocked when a pair of Minke whales showed up to catch some waves with them.

Someone was flying a drone to capture the footage and the aquatic activity started with a pod of dolphins munching down on some baitfish but the real action was these Minke whales which broke the surface and literally surfed waves alongside the surfers.

It’s pretty surreal to see these whales leisurely surfing along like it’s just another day, as if it’s totally normal for them to be in the lineup out there. The water is pretty clear and the surfers must’ve been able to see the whales coming from far away if they were looking but there’s a solid chance that the surfers were more focused on the waves and one of them dookied their wetsuit when they were paddling along and suddenly the water around them turned pitch black as a Minke whale swam underneath.

Here’s that stunning drone footage that’s been going viral over the past few days:

There aren’t a ton of details about this close-up encounter but here are some from 9 News:

Photographer Daniel Cook captured the encounter on his drone.
“You never think of seeing something like that, so yeah, unbelievable,” Mr Cook said.
Seaworld’s head of marine science Wayne Phillips was “amazed” by the footage.
“Although it’s not rare for minkes to be feeding on bait balls of small fish like that, to surf into that bail ball is just amazing,” Mr Phillips said. (via)

I’d never even heard of the Minke Whale as a species until a few years back when I went to Iceland for New Year’s Eve and saw it on a menu at one of the nicest restaurants in Reykjavik and later found out it’s a pretty common cuisine in Iceland. There are actually two species of Minke, the common (or northern) minke whale and the Antarctic (or southern) minke whale. The females grow up to 35-feet and the males grow up to 32-feet.

These whales have been found to live up to 60 years in the wild but the typical range is 30-to-50 years. They’re relatively fast swimmers, reaching speeds of up to 24 MPH and they’ve been known to ‘deep dive’ for intervals of 2 to 20 minutes. Interestingly, Minke whales were found to be a favorite snack of Killer Whales when a study back in 1975 on the stomachs of 49 Killer Whales found 84% of those Killer Whales had Minke Whale contents in their stomach.