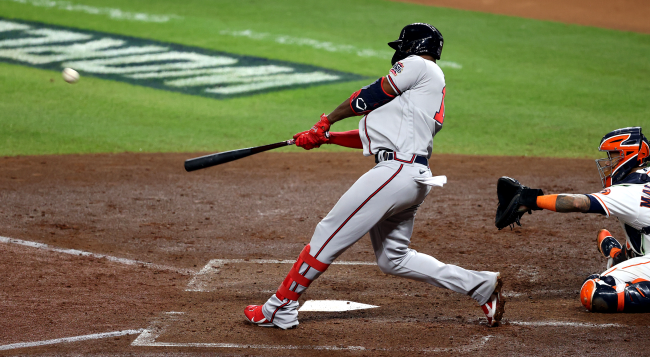 During the third inning of World Series Game 6 on Tuesday, Atlanta Braves outfielder Jorge Soler hit an absolute missile that flew over the train tracks in left field and completely out of Minute Maid Park.

Statcast somehow claimed Soler’s monster three-run home run went only 446 feet, when it certainly went further than that (Especially when compared to similar home runs that Statcast claimed went further in the past.)

The Braves ended up winning the game 7-0 giving Atlanta its first World Series title since 1995 and Soler was named the World Series MVP after hitting three go ahead homers in the series.

Which was all very fine and good, but many fans were still left wondering, “What happened to the baseball Jorge Soler launched out of Minute Maid Park?”

It turns out that Matt Young of the Houston Chronicle was able to actually find out and the story is pretty great.

When Manuel Ramos’ brother invited him over to his perfectly located abode at the 500 Crawford Downtown Apartments, he thought he was just going to drink some beers and crane his neck to watch some baseball from the apartment’s fifth-floor balcony.

Instead, he walked away with a piece of baseball history.

Ramos, his brother Richard and a large group of friends were having a World Series Game 6 watch party on Tuesday night just a block outside the Minute Maid Park Crawford Boxes, when they heard a groan inside the ballpark and then saw a flying white object come hurtling through the air and bounce off an awning outside the stadium.

It didn’t take them long to realize that was the baseball the Braves’ Jorge Soler had just crushed 446 feet over the train tracks to give his team a 3-0 third-inning lead.

The ball made a loud bang when it hit about 20 feet into the green awning that usually protects fans from the elements as they enter the ballpark off Crawford Street. Then, it rolled off and ended up lying on the sidewalk. As the piece of World Series memorabilia sat there untouched and somehow unnoticed, everyone at the party started scheming about how to get their hands on the ball that came to rest outside the stadium, but inside a chain-link fence that separates Crawford Street from the ballpark grounds.

Manuel Ramos was watching the #WorldSeries at his brother's place at 500 Crawford when they saw Jorge Soler's home run ball bang off an awning and come to rest on the sidewalk outside Minute Maid Park. Now, the ball is the hit of their party. https://t.co/AZHS7efMP6) via @chron

Ramos ended up getting the Soler home run ball, but how?

For that we go to ESPN’s Jesse Rogers.

…within minutes, Richard’s wife, Shawnda, and Manuel took to the street. Manuel guessed it took them about eight minutes to get down there — and then they discovered that the fenced-off area was inaccessible from where they were.

“I was talking to security, like, ‘Please, just escort me over there,” Shawnda said.

That conversation turned out to be the moment Manuel needed. As the security guards spoke with her, he jumped at his opportunity. Literally. “I guess I distracted them,” Shawnda said. “I didn’t even do it on purpose. I didn’t even know he came down [with me].”

Manuel jumped the fence, grabbed the ball, half hid it in his shirt and ran back up to their viewing party. It was then, they said, that security began looking for it — but to no avail.

Update: I found the ball. pic.twitter.com/ogAaWL3bko

So what are they going to do with Jorge Soler’s historic home run ball?

“The bidding for this ball starts at a million dollars,” Richard joked.