What Happened To Albert Belle? Here’s A Look Back At The Career Of The MLB Slugger 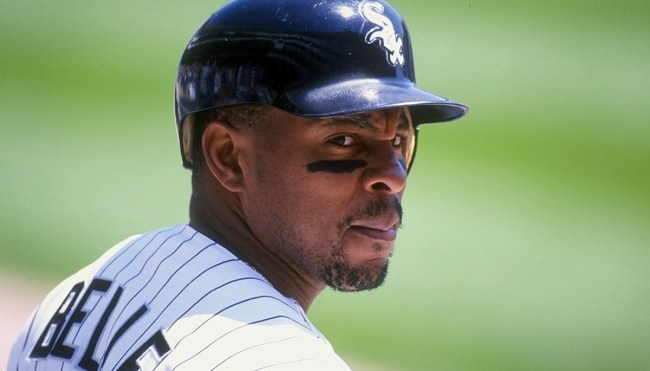 Albert Belle’s legacy will always be linked to his unbelievable power at the plate. The slugger became one of Major League Baseball’s most feared hitters in the 1990s. Over his 12-year career, Belle belted nearly 400 home runs, spending time with the Cleveland Indians, Chicago White Sox, and Baltimore Orioles.

He led the league in runs batted in on three separate occasions, producing a string of 10 consecutive 95-RBI seasons between 1991 and 2000. Belle was named an All-Star five times during his relatively short career and was a consistent candidate for AL MVP honors.

While his time on the field was first-rate, his Major League tenure will forever be tainted by off-the-field issues.

Belle was known to have a short temper, which many believe aided him in his success at the plate. A quote from Sports Illustrated’s Mark Bechtel stated, “When the surly slugger gets P.O.’d, baseballs get K.O.’d.” He played the game pissed off, and it worked for him at the dish.

When Albert Belle got hit by a pitch and refused to take 1st. @jomboy pic.twitter.com/Ira76yqrQy

That temper also led him to causing havoc in the locker room, destroying anything that got in his way. That includes bathroom sinks, thermostats, phones, coolers, and clubhouse walls. He was unfriendly to teammates, and members of the media, too, on multiple occasions throwing baseballs at journalists just trying to do their jobs.

He famously said that baseball writers shouldn’t have a say in the MVP voting. This, of course, coming after finishing second in the MVP race to Mo Vaughn in 1995. Most would say, objectively, that Belle’s stat line was much better.

Those same voters clipped him from the Hall of Fame ballot following his retirement. While he had fringe Cooperstown credentials, he certainly received no benefit of the doubt from the baseball writers.

A number of other incidents also occurred during his playing days, painting a picture of Belle as a standoffish, mean-spirited player. He often refused to give interviews and berated reporters with cursing and obscenities. His controversy off the field unfortunately overshadowed some of his greatest accomplishments on the diamond.

Let’s take a look at the slugger’s career, as well as his life after baseball.

Born in Shreveport, Belle developed his love for the game of baseball at a young age. His father was a coach at a Louisiana high school who’d often take Albert and his twin brother out for late-night batting sessions after getting home from practice.

That passion soon blossomed into an All-State career at Huntington High School. He also had a chance to represent the US in the Junior Olympics in 1984, where he played both outfield and pitcher to help his team land a silver medal.

Belle buoyed that amateur success into a scholarship offer from LSU. Playing for legendary coach Skip Bertman, he set program records in home runs, runs batted in, and total bases over his three-year career. He earned All-SEC honors as both a sophomore and junior, leading the Tigers to the College World Series in 1986 and 1987.

In one of those postseason runs, Belle was suspended for trying to run down a fan that was shouting racial slurs at him in the outfield. He might’ve succeeded, too, if not for a pair of teammates tackling him. It was the first time (of many) that his temper would be on display on a national stage.

Belle opted to forego his final season of college eligibility after being selected in the 2nd round of the 1987 MLB Draft.  He ended his career in Baton Rouge as a .332 hitter before heading off to the Cleveland Indians’ organization.

Belle didn’t spend much time in the minor leagues. Upon being drafted, he spent stints in Waterloo and Kinston with Cleveland’s Single-A affiliates. He hit .293 with 17 home runs in the 1988 season, resulting in a call-up to Double-A soon after.

In 1989, he smacked 20 home runs with the Canton-Arkon Indians, swiftly earning his first call up to the Major Leagues.

Unfortunately, that stay at the big-league level would be interrupted shortly thereafter.

Belle played 62 games in that 1989 season, hitting .225 with seven home runs. While the average wasn’t where he wanted it to be, his power was undeniable. An RBI machine, Belle drove in 37 runs over those 62 contests, a pace near 97 RBIs if stretched out over a 162-game schedule.

The production at the plate appeared to land him a spot on the 1990 roster, but a stint in rehab cost him the season. After receiving a 10-week stay for alcohol addiction, Belle played in just nine games for the Indians that year. It certainly wasn’t the start that he was looking for, but things soon began to look up for the budding All-Star.

As is the case with Belle, though, controversy was never far behind his on-field success. In that ’91 campaign, Belle got in an altercation with teammate Jeff Pillar after Pillar said to him, “Hey Joey, keg party at my house after the game.” (Belle went by “Joey” before his time in rehab. “Albert” was his way of reinventing himself.)

Fresh off his battle with alcoholism, Belle didn’t take the remark lightly. He fired a baseball directly into Pillar’s chest from five yards away.

I can’t help but be reminded of the scene from The Office where Andy returns from anger management wanting everyone to call him “Drew.” In this case, though, I wouldn’t want to be on the receiving end of a “Joey” fastball.

that tweet just reminded me of this scene from the office where andy punches a hole through the wall pic.twitter.com/Y90lLN7tXL

This wouldn’t be the only incident that Belle had with a teammate. There was a reported altercation at a nightclub with teammates where he hit a heckler in the face with a ping pong paddle. He also once smashed Kenny Lofton’s boombox in a clubhouse rage.

Belle landed his first of five consecutive All-Star seasons in ’93 while also winning a Silver Slugger award. The success continued in 1994 with a 36-homer season where he led the majors in total bases. Belle finished third in the MVP voting that season after hitting a career-best .357 from the dish.

There was a shadow cast over that All-Star performance as he was suspended seven games for having a corked bat, but that wouldn’t stop the slugger from continuing his dominance at the plate the following year.

The 1995 season was Belle’s best. He became the first player in MLB history to notch 50 homers and 50 doubles in the same season, despite the year being cut short due to a lockout. Belle led the league in runs, home runs, RBIs, doubles, slugging, and total bases. Still, he was somehow overlooked for the MVP award, which was given to Mo Vaughn.

Belle’s disdain for the media likely had something to do with that.

One of his biggest controversies came in the 1995 postseason, where he screamed at reporters during a World Series batting practice. One of those reporters was ESPN personality Hannah Storm. The result was a large fine from commissioner Bud Selig the following offseason. Cleveland would lose the World Series to the Braves in six games that year.

Belle’s final season in Cleveland would be 1996 as his antics and anger could not be controlled. While he did record a league-high 148 RBIs, he and the Indians parted ways at year’s end.

Belle soon became the first-ever player to land a $10 million per year contract, signing a 5-year, $55 million deal with the White Sox. He lived up to the billing, too.

In 1997, the slugger landed his fifth All-Star appearance after smacking 30 homers. The following season, he racked up a career-high 152 RBIs. He and teammate Frank Thomas formed one of the most dangerous duos in the middle of the Chicago lineup.

Unfortunately, Belle would soon be on the move again. He attempted to re-negotiate the terms of his contract after that 1998 season, but the White Sox wouldn’t budge. They sent him packing for Baltimore, who chose to bump his salary from $55 million to $65 million over that five-year stint.

As was expected in Baltimore, Belle’s success continued. He hit .297 with 37 home runs in year one. He followed it up with another 100-RBI season in year two.

What wasn’t expected was the flare-up of an arthritic hip condition that eventually forced Belle into retirement at only 34 years old. As quickly as he rose up the Major League Baseball ranks, he fell from grace.

And his negative relationship with the baseball writers led to him being left out the Hall of Fame. He was on the ballot in 2006 and 2007 but received less than 10% of votes in each year. This, despite having career numbers that compare favorably to players like Harmon Killebrew and Willie Stargell.

This sentiment from Paul Hoynes of the Cleveland Plain Dealer was shared by most media members.

“His numbers were good. I thought if he played one or two more years at a high level, I’d have to vote for him. But he didn’t. He was a bad guy. And what goes around comes around.”

After being cut from the ballot in 2007, Belle’s chances of entering Cooperstown are all but over. He finished his career with 381 HRs, 1,239 RBIs, and a .295 batting average. He ranks among the top 15 hitters all time with a .564 slugging percentage.

What Happened To Albert Belle After He Retired?

Belle’s life outside of baseball has been marred with trouble. In 1995, the outfielder was fined for reckless operation of a vehicle after chasing down trick-or-treaters that egged his house. He was later sued after one of the teenagers claimed they were bumped by the car.

More recently, Belle plead guilty to stalking an ex-girlfriend, resulting in a 90-day jail sentence and five years of probation.

In 2018, he was arrested at an Arizona spring training camp facility and charged with DUI and indecent exposure. Those charges, however, were dropped the following month.

Today, Belle lives in Pheonix with his three daughters and occasionally appears on sports radio shows to give his opinion on a variety of topics. Just this week, he was in the news calling Aaron Rodgers a “drama queen.”

Belle’s polarizing personality was often hard to accept, but he seems to have mellowed throughout his time in retirement. While he missed his induction ceremony into the Cleveland Indians’ Hall of Fame in 2016, he says that he’s mended broken relationships with the organization.

Belle’s legacy as a ballplayer will always be linked to controversy, but his status as one of the greatest sluggers of his era can’t be taken away.