What Happened To Chase Utley? Here’s A Look Back At The Career Of The Second Baseman 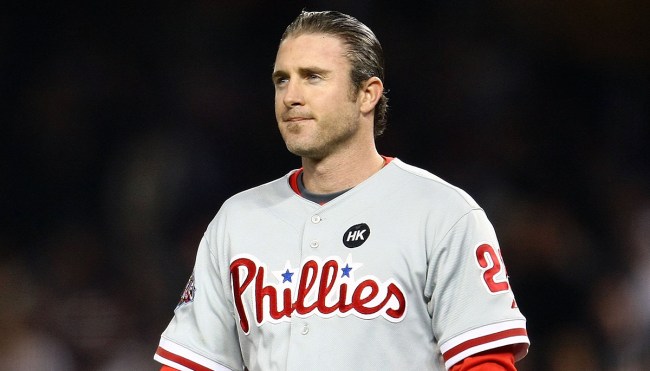 In 2006, I moved to Philadelphia, swapping Maine and Red Sox Country for the City of Brotherly Love.

At the time, I was an avid baseball fan who was still basking in the glow of Boston’s 2004 World Series championship. Upon my move to Philly, I continued to keep tabs on the Sox but was also caught up in the endlessly raging dumpster fire that is uprooting oneself and relocating to a new city. As a result, baseball took a bit of a backseat.

I also grew a mustache. It was a strange time.

After finally settling in, I decided to start paying attention to the Phillies. My reasoning was pretty simple: I loved being able to closely follow a team I knew while experiencing the ebbs and flows of the baseball season. I figured that if I was living in a city with an MLB franchise—and, more importantly, one in the National League—it made sense to kick the tires on adopting them as my team (or if anyone from home asked my “second-favorite team”).

I couldn’t simply just pledge to support them; I needed to know these dudes and what they were about. Thankfully, my brother-in-law is a quintessential baseball man and lifelong Phillies fan who proved to be a valuable resource. With the additional help of the regulars at a bar down the street and a variety of blogs, I took a crash course in the team heading into the 2007 season to get up to speed on their history, traditions, quirks, and how things looked going forward.

I also wanted to find a player that would be My Guy; the one who I would really focus on and whose name would be on the back of a t-shirt I’d end up buying. Jimmy Rollins, the team’s charismatic shortstop, was a solid and obvious contender. Ryan Howard was a massive power hitter on the come-up, and I also found myself taking a liking to Pat Burrell (even though few in the city did).

And then there was Chase Utley.

Once Chase entered the picture, the race was over. Done. Finished. How could it not be? Chase Utley was a baseball purist’s dream. He was tough, hard-nosed, stoic, reliable, and gritty as hell. He (wait for it) played the game the right way. So, as the 2007 season got underway, I was all in on Utley.

As it just so happened, I decided to hitch my wagon to the Phillies at a pretty good time. From 2007 to 2011, the team made the playoffs every year and appeared in two World Series (winning the title in 2008 before losing the following season).

During that span, the team went 473-337. They also recorded a franchise-best record in 2011, which saw them go 102-60 led by a fearsome pitching staff consisting of Roy Halladay, Cliff Lee, Cole Hamels, and Roy Oswalt (although that year ended in disappointment, as the team was bounced from the playoffs in the divisional round).

2011 was effectively the beginning of the end for that miniature dynasty. Over the next few years, core members of the team started finding new homes. That included Utley, who was reunited with Rollins when he was traded to the Los Angeles Dodgers in 2015.

He’d spend four years out west before retiring in 2018 and finished his career with 259 home runs, 1,885 hits, and a batting average of .275. The numbers are impressive but they fail to do Utley’s career justice.

So let’s dive in and do some justice, shall we? 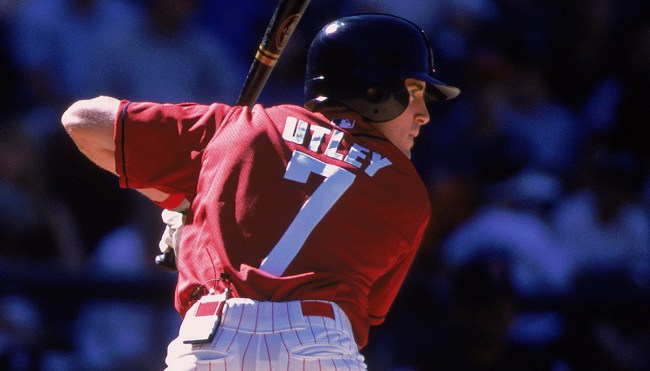 It feels like Utley’s career began when he descended from the heavens and into the waiting blossom of the Philadelphia sports scene, but it turns out that’s not actually the case.

Despite endearing himself to the locals with his blue-collar and no-nonsense style of play, Utley is a West Coast kid at heart. He was born in Pasadena, California and raised in Long Beach, and first made a name for himself during his time playing baseball at Long Beach Polytechnic High School.

Early on, Utley was a bonafide stud. In his senior year, he hit .500 and only struck out twice in 80 at-bats, which earned him All-American honors. He was drafted by the Dodgers in the second round of the 1997 MLB Draft but opted instead to attend UCLA and play for the Bruins.

Utley played a shortstop in high school but was moved to second base at UCLA because of concerns about his arm strength. By his junior year, he was hitting .382 and led the Bruins to the NCAA Super Regionals on his way to being named to the All-American teams of both The Sporting News and National Collegiate Baseball Writers. He’d also spend a couple of summers in Massachusetts playing in the fabled Cape Cod Baseball League.

The Phillies drafted Utley 15th overall in the 2000 draft, and after working his way through their minor league system, he made his Major League Baseball debut on April 4, 2003. Utley would go on to appear in 43 games that year, logging 32 hits in 134 at-bats. His most memorable moment came in late September when he hit into a double play during a game, which was the last out ever recorded at Veterans Stadium.

In 2004, Utley appeared in 94 games and had the locals clamoring for him to play more. His ascension was initially blocked by Placido Polanco, but the path cleared in June of the following season after Polanco was traded and Utley was named the team’s starting second baseman. Utley would hit .291, have 158 hits, and knock 28 home runs that year, and wouldn’t relinquish his role as the team’s second baseman for the next decade. 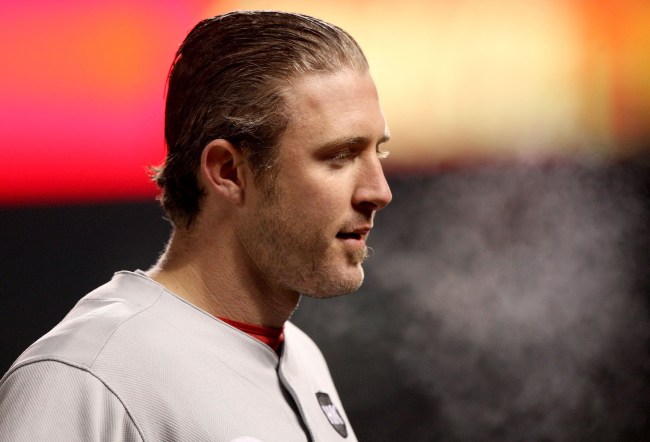 2006 marked the first season where Utley was Philadelphia’s starting second baseman from the jump. During that campaign, Utley recorded a 35 game hitting streak, which was the longest by a left-handed hitter since 1945 (although Rollins had him beat by two games with a 38-game streak of his own that started at the end of the 2005 season and carried into the following one).

Utley finished the year scoring a league-leading 131 runs, hitting .309 (one of two times he’d top .300 in a season) and finishing seventh in the National League MVP race. He also earned a spot on the National League All-Star team (the first of four consecutive selections), and while he didn’t always receive a warm welcome from opposing fans, he handled it with the utmost professionalism.

What is arguably the high watermark of Utley’s career came during the 2008 season. That year, the Phillies went 92-70 while capturing the National League East crown before securing the pennant on their way to beating the Tampa Bay Rays to bring the franchise its first World Series since 1980.

Utley’s offensive numbers weren’t great during the championship series, but in Game 5, he treated fans to the best defensive play of the postseason when he faked a throw to first and was able to catch Jason Bartlett of the Rays at home plate.

In the years that followed, Utley remained consistent and reliable until his knees started to give him problems. He played 115 games in 2010, 103 games in 2011, and 83 games in 2012 as his numbers began to decline. However, after seeing a specialist, he experienced a resurgence, as he played 155 games in 2014 (his most since 2009) and was named a starter in that year’s All-Star Game.

2014 would be his last full season with the Phillies, as Utley was traded to the Dodgers that August.

Chase Utley’s Time With The Dodgers 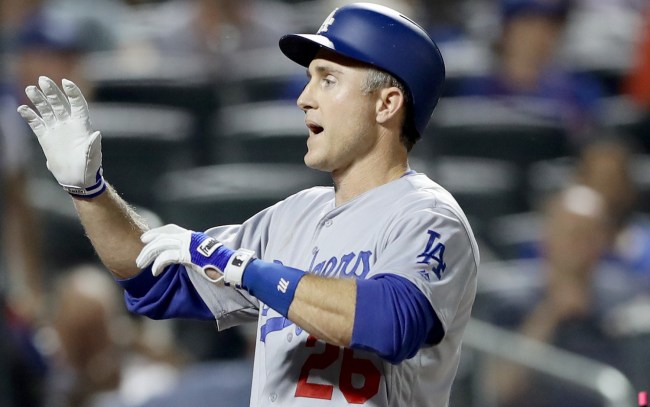 Utley was traded to the Dodgers nearly twenty years after the team originally drafted him in 1997. Los Angeles had gained a reputation as a franchise willing to take on aging veterans and Utley joined a squad that included Adrian Gonzalez, Carl Crawford, and Howie Kendrick in addition to up-and-comers such as Joc Pederson, Yasiel Puig, and Corey Seager. With Kendrick entrenched at second for the team, it was clear Utley would start his Dodger tenure coming off of the bench.

However, it didn’t take long for Utley’s gritty style of play to make its mark. In the second game of the National League Divisional Series against the New York Mets, Utley slid hard into second base trying to break up a double play and in the process took out Rubén Tejada.

It did not go over well. Utley was ruled safe but Tejada suffered a broken right fibula. The league later reviewed the play and suspended Utley for two games. However, he appealed the suspension and was able to finish out the postseason for the Dodgers (which would wrap up three games later with the Mets winning.) Utley’s suspension was eventually lifted and all was forgiven.

In a game against the Mets the following season, Mets pitcher Noah Syndergaard threw at Utley in retaliation. Utley got the last laugh, though, as he finished that game with two homers, including a grand slam.

In three full seasons with the Dodgers, Utley appeared in an average of 117 games. During that stretch, his numbers were pedestrian, and he went hitless during L.A.’s 2017 playoff run before being left off the postseason roster the following year.

When And Why Did Chase Utley Retire? 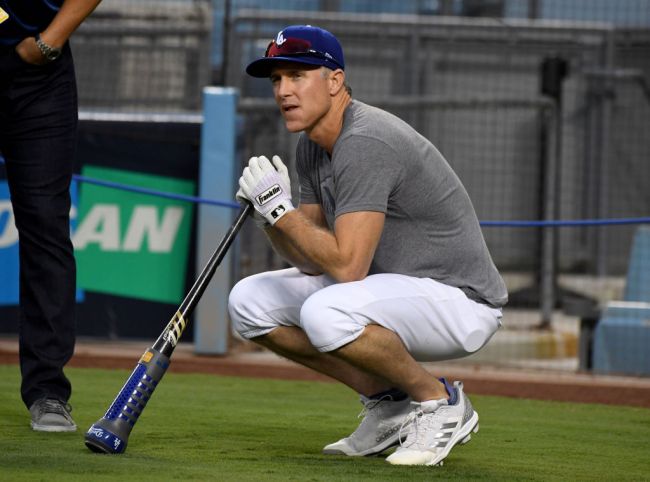 In July of 2018, Utley announced the upcoming season would be his last, saying he was “ready to be a full-time dad.” He went on to say that he had “transitioned to a part-time player…a part-time strength coach, part-time pitching coach, occasionally part-time catching coach as well as a part-time general manager. The thing I’m having the most difficult time with is being a part-time dad” (Utley and his wife Jennifer have two sons).

Following the 2018 season, Utley remained in Southern California, working in the Dodgers’ front office and providing commentary for their games. He also coaches youth baseball and his family has been active in supporting causes geared around the care and welfare of animals.

The Phillies celebrated Utley and his retirement with a ceremony at Citizens Bank Park in June 2019. Utley, who took the field in his sporting his longtime #26, admitted that he missed “winning with a Phillies jersey on.” One of the highlights of the celebration was the ceremonial first pitch, where Utley had a catch with Rob McElhenny of It’s Always Sunny in Philadelphia.

Here’s to you, Chase, and here’s to me, for making the right decision when it came to picking a favorite Phillie all those years ago.