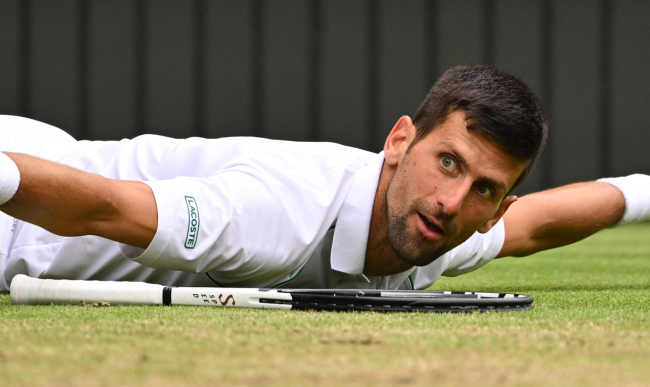 On Tuesday, number one seed Novak Djokovic advanced to the semifinals of this year’s Wimbledon tournament. It wasn’t easy though. He had to come back from two sets down to beat the tenth seed Jannik Sinner from Italy.

In between the second and third sets, Novak Djokovic was sitting in his chair when he was passed a bottle from his team and proceeded to appear to not only drink from it, but inhale it in some way, after confirming with them that he was supposed to do so.

Djokovic then went out and ran off three straight set wins, relatively easily, winning 6-3, 6-2, and 6-2.

This bizarre behavior, followed by the ease in which he went on to win the match, led many conspiracy theorists on the internet to question what exactly was in the bottle that Djokovic had ingested.

I would very much like to know what was in this bottle. It certainly wasn’t liquid, and he gestured to his coach before inhaling it. Very odd. pic.twitter.com/bBG62BOMFh

What seems weirdest is that someone has gone to the trouble of disguising whatever it is by putting it in a bottle.

@dewiwilliamsx @gwokka @KezWheeldon this looks dodgy as. Who drinks with the bottle down?! Surely this needs to be looked at?! 🤔

Did you hear that he had gone for a ‘toilet break’ halfway through the match today too. 2 sets down and emerged like a new player 😬

He's doing it in front of everyone precisely not to arouse suspicion. People think he wouldn't dare do it in public. That's how he gets away with it.
The same reasoning goes for him saying he can't talk about it when asked about his long toilet break and coming back a changed man

Djokovic said after the match that his little pep talk to himself between the second and third sets helped him recover.

“Where not much is happening positively for you on the court in terms of tennis, and the other guy on the court is dominating the play, sometimes you know these things are necessary,” he said. “You know — a little break and a little pep talk and try to recuperate — and I guess regather the thoughts and reassemble everything that you have and come at your opponent with the best possible game.”

This isn’t the first time Novak Djokovic has sparked questions while drinking something during a match. In fact, it goes all the way back to 2012.

Back in February of 2020, he was also asked about it after a similar moment where his team had a ballboy deliver a bottle to him mid-match.

“The liquids were magic potions that my physio prepares in his lab,” he responded. “That’s all I can say (smiling).”

Tennis fans weren’t buying his explanation then either.