Where Does This Epic Minor League Manager Meltdown Rank On The List Of All-Time Ejections? 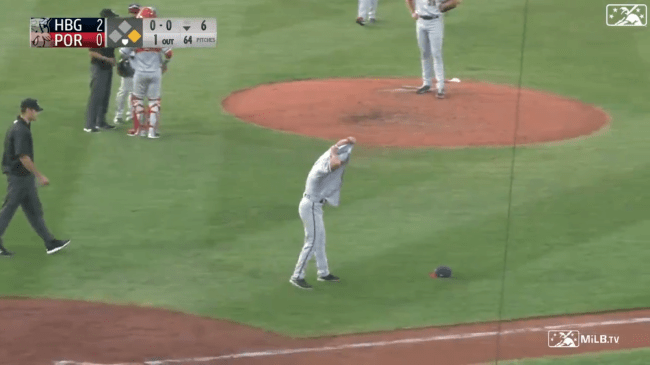 Tis the season for baseball managers to lose their damn minds and get ejected from games in the most epic fashion possible.

We are now far enough along in the baseball season that we have officially hit what is referred to as the “dog days of summer.”

It’s this time of year, usually considered to be between July 3rd and August 11th, that the temperatures and humidity are the worst and managers have had enough time to figure out if their teams suck or not.

As a result, the combination of the two occasionally causes a manager’s frustration to let loose on an unsuspecting umpire in the form of a meltdown over even the most minuscule perceived offense.

It all got started in the 2021 dog days a couple of weeks back when Portland Pickles manager Mark Magdaleno went on a tirade where, in a twist, he threw the umpire out of the game, not just once, but twice.

Fast forward to this past Saturday and another Minor League manager, Tripp Keister of the Harrisburg Senators, not only lost his mind, he lost his jersey, during an epic meltdown that led to his ejection from the game.

Keister, who manages the Nationals Double-A affiliate, was very unhappy when in the bottom of the sixth inning his team was called for interference.

All in all it was quite a display.

So heated, the jersey had to come off. pic.twitter.com/96jugin4Kl

But where does Tripp Keister’s epic meltdown rank on the list of all-time baseball manager ejections? Let’s take a look.

1988: Billy Martin grabs a handful of dirt and throws it on the umpire after being ejected.

2007: Lou Pinella gets the boot then kicks dirt on the ump.

2001: Pirates manager Lloyd McClendon gets ejected and takes first base with him.

2007: South Georgia Peanuts manager Wally Backman gets thrown out then tosses 22 bats and a bucket of balls onto the field.

2007: Phillip Wellman of the Mississippi Braves puts on a show for the ages.

Looks like 2021 has some work to do before it comes even close to 2007 when it comes to epic manager meltdowns.

Oh yeah, Keister’s Senators ended up losing the game to the Portland Sea Dogs by a score of 6 to 4.