Which Conor McGregor and Dustin Poirier Will Show Up At UFC 264? Why It’s Important To Revisit Their First Two Fights 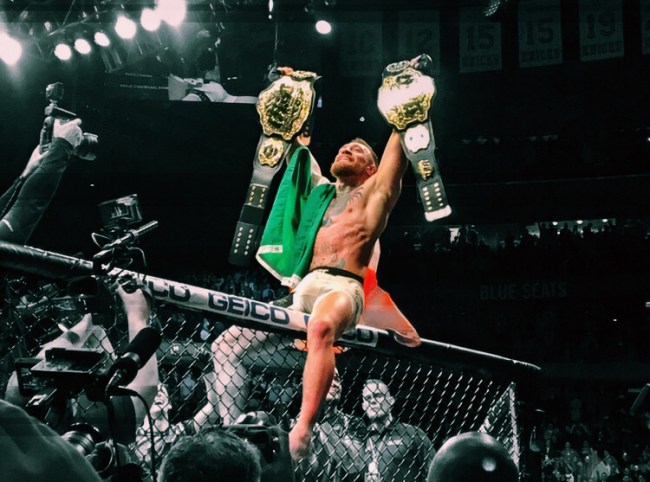 UFC 264 fight night is coming up quick, and the anticipation for this trilogy bout between Dustin “The Diamond” Poirier and “The Notorious” Conor McGregor is growing, day by day.

With every passing eve, it’s impossible not to contemplate all the possible scenarios and outcomes for this very special PPV main event. We’ve seen McGregor and Poirier inside the Octagon together before, twice in fact. So, as we inch closer to UFC 264 (July 10, 7 p.m. PST / 10 p.m. EST on ESPN+ PPV) it’s essential to take a look back at the last two times Conor and Dustin squared off.

Beyond The Easy Narrative

There’s a familiar narrative that’s been presented prior to UFC 264. Much like UFC 257 in January 2021, many experts — UFC lightweight GOAT Khabib Nurmagomedov among them — are pointing to McGregor’s power and cardio and making bold predictions that his best chance to win the fight is within the first round. Those same experts are favoring Poirier should the fight go beyond the opening frame, on account of his grit, heart, and crafty mix of striking, clinch work, and wrestling.

This narrative, while not incorrect, feels a bit lazy if you ask me. It’s an easy evaluation of McGregor’s 22-5 record, summing up his entire career as a collection of 14 first round knockouts, 6 second round finishes, and five defeats, four of which came via tapout.

The same easy narrative would point out that of his 27 career fights, McGregor has only gone to the judges’ scorecards on two occasions (once against Max Holloway in 2013, the other came in an instant classic against Nate Diaz at UFC 202), certifying “The Notorious” as an all-action fighter.

And, again no one would be wrong to point this out. However, McGregor, as it pertains to Poirier, is so much more than just a collection of statistics and a series of numbers. He’s an unpredictable animal, a master of mental warfare, and a mixed martial arts veteran who has already demonstrated an ability to learn from defeat and come back to best an opponent who previously finished him inside the Octagon.

He did it to Nate Diaz, so what’s stopping Conor McGregor from finishing Dustin Poirier at UFC 264?

Well, for starters, Poirier already knows what it’s like to fall victim to McGregor’s mind games. It happened in their first fight at UFC 178 in September 2014. Fighting in the featherweight division back then, Poirier crumbled under the pressure of McGregor’s “Mystic Mac” persona and constant taunts. Poirier lost the fight before they even stepped foot inside the Octagon at the MGM Grand Garden Arena, and it basically took McGregor one good left hand over the ear, along with a few follow up shots on the ground to finish “The Diamond.”

Unlike the first fight, McGregor headed into UFC 257 as a more mature fighter and person. Rather than insulting Poirier with “Pea Head” comments, McGregor completely changed his approach, almost befriending “The Diamond” in the pre-fight lead up. The tactic didn’t work.

While McGregor won the first round at UFC 257, wobbling Poirier with a clean right jab, he was unable to faze or fluster Dustin, who employed the calf kick to completely demolish Conor’s leg. And, with McGregor’s leg badly compromised, Poirier moved in for the kill, earning the finish midway through the second round.

For Poirier, the growth between the first two fights was evident and apparent. He grew into a much more mature and patient mixed martial artist with a much broader skill set. It was a perfect read by “The Diamond,” but McGregor’s attempt to transform from the master of mental warfare into a nice guy and family man didn’t pay off.

Watching and re-watching UFC 257, it’s clear that McGregor had some early success against Poirier only to fold in the second. But was it really a cardio issue? No, it wasn’t.

Critics of McGregor’s cardio and stamina like to point to his losses to Nate Diaz, Floyd Mayweather, and Poirier as proof that McGregor gasses out. But that’s definitely an over-simplification. In fact, there are logical ways to explain McGregor’s fatigue.

Against Diaz at UFC 196, McGregor was fighting up two weight classes on less than two weeks notice, so the loss is somewhat justified, not to mention the fight was excellent. Against Mayweather, it was mostly a factor of fighting one of the greatest boxers of all time in his first professional boxing match. Also, coincidentally, when McGregor started to fade in the ninth and tenth rounds, that was after the 25-minute max for an MMA headlining bout.

Against Poirier, it was really a story of the calf kick debilitating McGregor and taking him out of the fight rather than a cardio issue, so for this trilogy fight, “The Notorious” needs to stay out of danger and maintain a higher level of defensive responsibility.

So, heading into UFC 264, how will McGregor change his approach in order to goad Poirier into a firefight, and how exactly can “The Notorious” rattle a combat-tested and approved MMA veteran who is known to learn from his mistakes?

When it comes to post fight adjustments, McGregor has already demonstrated how he can return from defeat inside the Octagon. However, this time, against Poirier, McGregor has been attempting to shake Poirier and get back in his head. It’s been a major part of his modus operandi heading into the trilogy bout.

We’ve already touched on some of McGregor’s new mind games — he failed to pay $500,000 promised to Poirier’s charity, choosing instead to give it to another similar organization — but he’s now gone a step further making a public plea to keep the UFC 264 PPV main event standing and in striking range.

Referring to Poirier’s use of the takedown and ground game in their second fight, McGregor tweeted out that the “first on to shoot [for a takedown] at UFC 264 would be a dusty b****.”

Does that even really mean anything? No. It doesn’t. But McGregor very much wants to shake Poirier mentally, much like he did in 2014, in hope to gain an advantage before even stepping foot into the Octagon on July 10 because it’s in the mental department that “The Notorious” has had his biggest success against Poirier.

And just like it’s not accurate to reduce McGregor’s career to a series of numbers and stats, the same can be said about Poirier.

“The Diamond” is way more than just a fighter making his 26th walk to the Octagon (he’s 19-5, with 1 No Contest in the UFC). He’s way more than his eight knockouts and four submissions. Way more than his 12 performance bonuses and seven Fights of the Night. He’s a decorated MMA veteran who understands all facets of the game, and while McGregor continues to try and rattle Poirier before the fight, it doesn’t seem like “The Diamond” is taking the bait.

With all of this knowledge and understanding, it’s clear that the previous fights between McGregor and Poirier will have some bearing on this trilogy fight at UFC 264. However, it’s also apparent that the first two fights and finishes don’t matter as much as one might think.

So, which Conor McGregor will show up at UFC 264? The one who starched Poirier in less than two minutes, or the fighter who crumbled when things got rough?

And which Poirier will walk into the Octagon on July 10? The one who folded in the first round in 2014, or “The Diamond” who shined brightest on the biggest stage?