Catching Up On The Conor McGregor – Dustin Poirier Rivalry: What’s Happened Since The Last Fight? 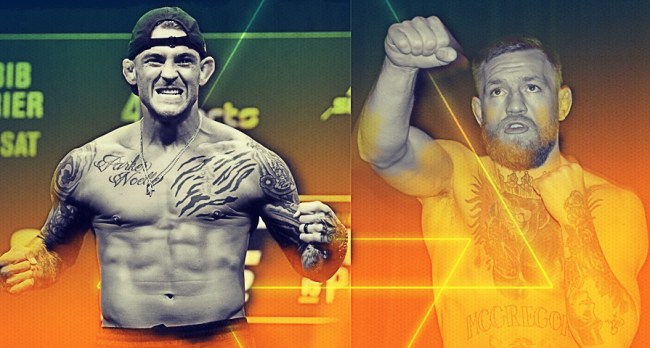 “The Notorious” Conor McGregor has wasted no time generating some good press to kick off the final push towards UFC 264.

With that out of the way, Conor McGregor will now shift all his attention to the final installment of his trilogy against Dustin “The Diamond” Poirier, a bout that will likely determine the UFC’s next lightweight title challenger. It’s a big-time fight between two of MMA’s most highly skilled lightweights.

Less than six months after Poirier knocked McGregor out at UFC 257, and six years after “The Notorious” earned a TKO over “The Diamond,” Conor and Dustin will battle inside the Octagon to break the tie once and for all.

A bout that easily qualifies as essential viewing for any combat sports fan, UFC 264 has stakes, storylines, techniques, and the paths to victory. We’ll be covering them all in the coming weeks in the leadup to UFC 264; however, before McGregor and Poirier step back into the Octagon, it’s important to pick up right where we left off, right after Poirier bounced McGregor’s head off the canvas in January, becoming the first fighter to knock “The Notorious” out in MMA competition.

In fact, quite a lot has happened in the last six months to further solidify the McGregor-Poirier rivalry. From tried-and-true smack talk, social media jabs, and nine-figure business deals, to charitable donations gone awry and legal victories, McGregor has kept his name in the headlines leading up to UFC 264, setting the stage for yet another massive bout against Poirier.

So, before we go any further, it’s time to bring you back up to speed on the Conor McGregor vs. Dustin Poirier saga.

One of the big storylines leading up to their last bout in January 2021 was McGregor’s commitment to donate $500,000 to Poirier’s charity, the Good Fight Foundation.

But what happens when an international superstar publicly welches on a philanthropic donation? Well, in the case of Conor McGregor, he gets called out on social media by Dustin Poirier for failing to honor his commitment to charity.

With Poirier taking to Twitter to reveal that McGregor never made good on his donation to the Good Fight Foundation, McGregor immediately fired back at “The Diamond,” claiming that it was due to Porier’s failure to provide detailed plans for the intended use of the funds.

So enraged by the public shaming was McGregor that he even briefly canceled the trilogy fight, forcing Poirier to admit fault for airing dirty laundry in public. However, once Poirier extended his own olive branch, “The Notorious” again agreed to the fight, but went a step further by gifting the pledged amount to the Boys and Girls Club of Acadiana in Lafayette, Louisiana.

It was a brilliant move by McGregor, whose name will now be etched in stone in Poirier’s hometown.

Talk about a master troll.

Right in the middle of McGregor’s donation spat with Poirier, just before he threatened to cancel the bout calling Poirier an “inbred hillbilly,” “The Notorious” issued a challenge and a prediction for his PPV main event at UFC 264.

First telling “The Diamond” that he could be found “in the middle” of the Octagon “from the very go,” McGregor went on to offer a prediction a few days later, stating that he’d finish Poirier via fourth-round front kick TKO, writing that “his nose needs straightenin (sic) and I’m Rhinoplasty” in an Instagram post.

It’s a rather odd prediction by McGregor, who’s known as a big puncher early in the fights that tends to fade in the later rounds. Poirier on the other hand, has won three fights in the championship rounds, including his instant classic against Dan Hooker last year and his interim lightweight title fight against Max Holloway in 2019.

Then again, Conor is “Mystic Mac.”

McGregor Scores a Series of Economic and Legal Wins

If you’ve followed Conor McGregor at any point since joining the UFC in 2013, you’re well aware that he loves money at least as much as he loves MMA fighting.

The highest-grossing MMA fighter in history, both at the gate and on Pay Per View, McGregor enjoys flaunting the wealth he has accumulated throughout the course of his career. And, just last month, he was named the top-earning athlete of 2021 by Forbes magazine, having generated roughly $180-million during the pandemic, mostly on account of selling his Proper 12 whiskey brand for upwards of $600-million in April.

It’s not exactly an athletic achievement, and not even directly tied to his fight against Poirier at UFC 264, but when McGregor’s name tops a list, outranking Lebron James, Lionel Messi, Tom Brady, and Cristiano Ronaldo, it’s impossible not to take notice.

There is some potential relevance to the Poirier trilogy fight on July 10 though. With 180 mil in the bank, it remains unclear how hungry McGregor is to win this bout. Then again, he’s probably already lining up his next nine-figure deal, so a victory at UFC 264 could do wonders for his stock.

Also of note is the massive news that McGregor was cleared of sexual assault after an alleged incident in Corsica, France last summer. Again, it’s not directly tied to the Poirier fight, but imagine that six months ago, “The Notorious” went into the Octagon with an extremely serious legal battle hanging over his head.

There’s no way that couldn’t have affected his performance last time around.

With a little less than two weeks to go until UFC 264, it’s likely that McGregor will resume his usual trash-talking ways in an effort to goad Poirier into a brawl when they step in to the Octagon on July 10.

And, unlike the last pre-fight buildup, when McGregor chose to play the good guy — a stark contrast to his normal polarizing and incendiary persona — this time around, Conor is already planting the seeds for a very messy and ugly fight week, full of trash talk and controversial remarks and behavior.

So stay tuned, and check back for more daily UFC 264 updates, complete with fight previews, technical talk, and fight analysis.