Who Is Alyssa Nakken, The First Female To Coach On Field During A MLB Game? 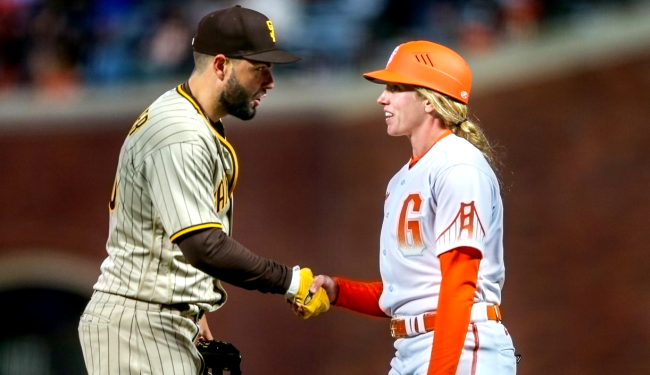 The San Francisco Giants, who have made it readily apparent do not care what baseball traditionalists think, once again broke new ground on Tuesday night.

During Tuesday night’s game between the Giants and San Diego Padres, San Francisco made history by having their assistant coach 31-year-old Alyssa Nakken coach first base after their regular first base coach Antoan Richardson got ejected.

Taking over as tonight’s first base coach:

The occasion was at least third time Alyssa Nakken had made history in Major League Baseball.

In 2020, Nakken became the first full-time female coach in Major League Baseball history. Then in June of last year, she was the first base coach for the Giants in an exhibition game.

So, who exactly is Alyssa Nakken and why is she quickly moving up the coaching ranks with the San Francisco Giants?

The moment history was made. Congrats, Alyssa Nakken 👏 pic.twitter.com/pzW7NKHTwb

Well, to begin with, the Woodland, California native was a three-sport athlete in high school, playing softball, basketball, and volleyball.

From there she went on to attend California State University in Sacramento where she played first base for the Hornets from 2009 to 2012. It was there that she was named to the All-Pacific Coast Softball Conference four straight years, ending her college softball career with a .304 batting average and 19 home runs.

While at Cal State-Sacramento she also received a bachelor’s degree in psychology – always helpful in baseball circles.

In 2014, Nakken landed a job with the Giants as in their baseball operations department, working on the team’s health and wellness programs.

After earning a master’s degree in sports management from the University of San Francisco in 2015, and working as the chief information officer for the school’s baseball team, Nakken was promoted in 2020 by the Giants to the position of assistant coach – the first female to ever attain such status with a MLB team.

In that capacity, Nakken has been working with the aforementioned Antoan Richardson, coaching at first base in intrasquad games and helping out with outfield and baserunning instruction.

“I think people are able to see, not just women, but young men, men, young girls, women, everybody can just see that there are a lot of opportunities in baseball,” Nakken said after her historic game. “Not just in baseball. I think that sometimes we limit ourselves to thinking what we could do — at least that’s my experience. I never thought that I could do something like this.”

Turns out that she can.

Alyssa Nakken knows the meaning of this moment tonight for all to see that girls, women can do anything. pic.twitter.com/sW5W0pcVYx

Alyssa Nakken already has one jersey in the National Baseball Hall of Fame and Museum. Now it looks like she will probably have two.