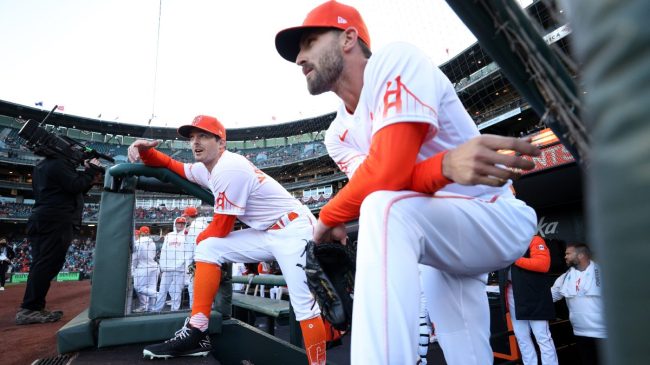 The San Francisco Giants have been taking some heat from baseball traditionalists.

In a blowout win over the Padres on Tuesday, San Francisco players and management opted to neglect some of the sport’s “unwritten rules” in an attempt to gain an advantage for games later in the series.

The most egregious offense was a sixth inning bunt-for-base-hit by Mauricio Dubon with the Giants leading the game by nine runs. San Diego Padres manager Bob Melvin didn’t take kindly to what he views as bad sportsmanship.

Padres manager Bob Melvin was visibly upset after Mauricio Dubon bunted for a hit, while the Giants were up 11-2 in the 6th inning.

The Padres aren't thrilled that Mauricio Dubon bunted for a hit with a nine-run lead: pic.twitter.com/Jy7yrFeDwR

Giants manager Gabe Kapler sees no issue with the bunt, or a variety of other incidents that happened throughout the game.

The San Francisco leader also mentions a second inning steal by Steven Duggar with his team leading 10-1. Check out his postgame comments below.

Gabe Kapler says he supports Mauricio Dubon's decision to bunt in the sixth inning despite the Padres' objections pic.twitter.com/6yFiJeDwMf

“Sometimes that means trying to get a little deeper into the opposition’s pen, and I understand that many teams don’t love that strategy. And I get why… It’s not to be disrespectful in any way… It’s the best way to try and win a series.

“If other clubs decide they want to do the same thing to us, we won’t have any issue with it.”

He’s got a point.

Working the opposition’s pitching staff deeper into games can be key to winning a three- or four-game series. And let’s get real, these are professional players. As Kapler notes, it’s not meant to hurt anyone’s feelings, it’s about getting as many wins as possible.

Giants Players Have Embraced This Strategy

Kapler mentions that his team talked about the strategy prior to the year. His players seem to share the same sentiment.

#SFGiants are fully behind their strategy to pile on.

Joc Pederson: "If you don’t like it, play better."

Alex Cobb: "We know they’re not going to be happy. And that’s OK."

Dubon: "We’re trying to win a series. I’m not trying to disrespect anybody."https://t.co/HyC1voJ13W

Dubon, specifically, was asked about the bunt after the game. He mirrored what was said by his team’s manager.

It will undoubtedly rub more opponents the wrong way moving forward, but don’t expect the Giants to change their line of thinking. San Francisco won their first series of the season using these tactics. They’ll try to pick up another series win in the finale versus San Diego.

As long as it continues to work, they won’t care what their opponents think.