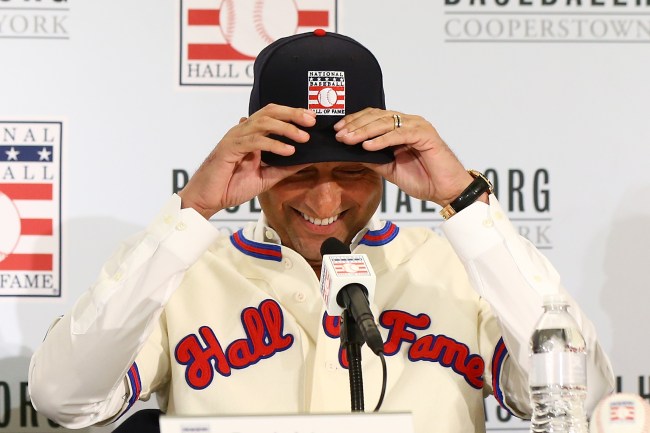 When the Hall of Fame votes were announced this year and it was revealed that New York Yankees legend Derek Jeter appeared on 396 out of 397 total ballots the baseball world damn near lost its mind. How couldn’t THE CAPTAIN be a unanimous entry into the Hall of Fame as a 14x All-Star, 5x World Series champ, and a World Series MVP?!?

Personally, I had zero problems with it. Derek Jeter was ALWAYS going to make it into the Hall of Fame. Perhaps the voter thought their vote was inconsequential and wanted to put other people on their ballot that needed the votes. Perhaps the voter thought Jeter needed to sweat it out a little. Whatever the case was, Jeter didn’t appear on the 397th ballot and now we’ll probably never know who it was that left Derek off their ballot.

As explained over on Yahoo! Sports by Mike Oz, it’s weird to begin with that all of the writer’s ballots aren’t made public. All of the year-end ballots for Cy Young/MVP/ROY are made public so why aren’t the Hall of Fame ballots public? The Baseball Writers Association of America actually voted to make the HoF ballots public (80-9 vote) back in 2016 but the Hall of Fame rejected that vote for some reason:

The BBWAA voted to make all Hall of Fame ballots public after the election announcement, but the Hall of Fame rejected. Writers may release their own ballots, but their votes will not automatically be made public. Unanimous vote still highly unlikely for anybody, even Chipper.

As for why we’ll most likely never know the identity of how left Derek Jeter off their ballot, here’s the explanation from Yahoo! Sports:

Even if Jeter didn’t care, the Internet doesn’t forget. So Tuesday when the BBWAA revealed all the ballots that voters elected to make public, the obvious question was there: Would the Hall of Fame voter who didn’t pick Jeter reveal him or herself?

The answer: Nope. Now there’s a good chance we’ll never know who it was.

That leaves 82 ballots that are private — and one that doesn’t have a checkmark by Jeter’s name.(via)

Because the Hall of Fame in Cooperstown, New York rejected that 2016 vote to make all HoF ballots public and left it up to the writers to make their own ballots public it now likely means we’ll never know who among those 82 ballots left Derek Jeter off, robbing him of that unanimous immortality his former teammate Mariano Rivera locked up the year before.

To see all of this year’s public ballots that were released you can visit this listing on the Hall of Fame’s website.

As for why that voter probably chose to keep his ballot private, you can click here to read the article over at Yahoo! Sports in full.