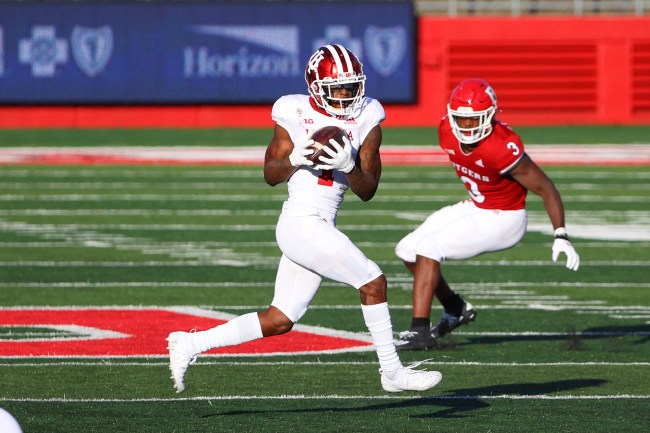 Indiana football’s leading receiver was born Mister Elias De’Angelo Philyor, but he is better known as Whop. The 5-foot-11, 180-pound senior pass-catcher received his nickname from his father at a young age because of how much he loves Burger King Whoppers.

“How’d you get your nickname?” 🍔 pic.twitter.com/sacrwkioE8

His birth name is cool enough. Someone named Mister Elias De’Angelo is destined to succeed in whatever he does. However, the nickname is equally as epic and the story makes it that much better. His mom is not a big fan, but she has embraced the reality.

“Oh my God, that name,” she told Sports Illustrated. “His dad gave him that nickname because he loved Burger King Whoppers and then his whole side of the family started calling him Whop. Then all of his friends started with it, and then everybody else. But he’s always going to be De’Angelo to me. That’s my little boy right there, my little De’Angelo.”

No. 13 Indiana has begun the season 2-0 and are on track to take down Michigan this afternoon and move to 3-0. Philyore has 11 catches for 79 yards against the Wolverines with just over eight minutes left in the fourth quarter and recorded 173 yards and a touchdown on 10 catches in the first two games. He is a large component in the Hoosiers’ passing scheme as a shifty, slick slot receiver. He also happens to have one of the best nicknames in college football, and that always factors into a player’s potential ceiling.