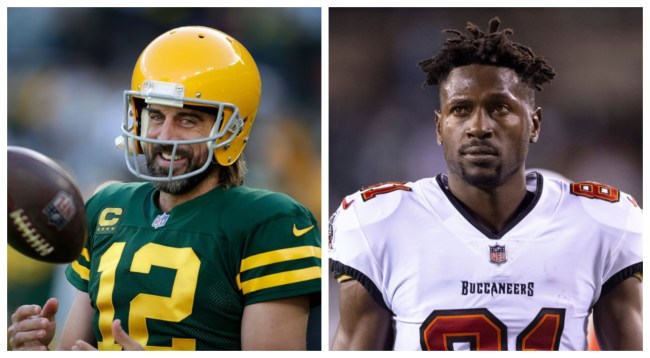 When the news broke that Antonio Brown was handed a three-game suspension by the NFL, Aaron Rodgers started trending on social media.

Some NFL fans were curious as to why Brown was facing such a severe punishment while Rodgers got a slap on the wrist for his debacle involving his vaccine status.

In reality, there’s a vast difference between Rodgers’ situation and Brown’s.

Brown misrepresented his vaccination status by allegedly purchasing and using a fake vaccination card, which mislead the NFL into thinking he had received the vaccine.

Rodgers did not mislead the NFL at all, he mislead the public and the media by saying he was “immunized” during the offseason.

Using a fake vaccine card and misleading the public can lead to criminal penalties and is a felony in certain states punishable by up to four years in prison.

Duping the media into thinking you’ve received the jab as Rodgers did may be frowned upon, but it’s certainly not illegal.

On top of that, the NFL knew that Rodgers had not been vaccinated and all reports indicate that Rogers followed and continues to follow the very strict protocols for unvaccinated players in the league.

Brown, who certainly has a history in the NFL, did something illegal, lied to his employer, and got caught, hence the three-game suspension.

While you can argue that Rodgers should have perhaps received a harsher punishment than his $14,650 fine, his situation compared to Brown’s couldn’t honestly be any different from one another.