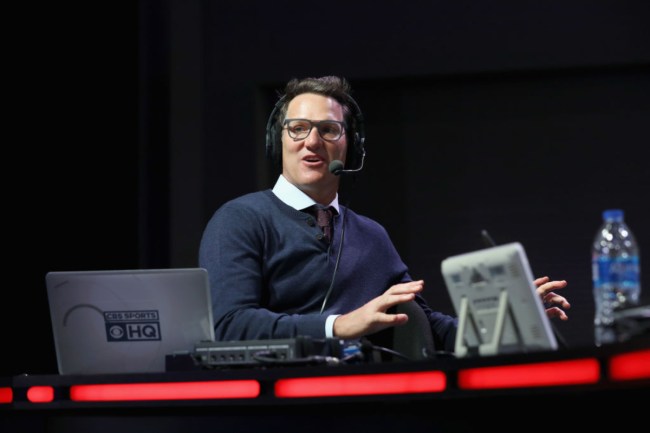 We’re coming up on the five-year mark of when ESPN laid off a sizable amount of employees ranging from behind-the-scenes personnel to on-air talent. Danny Kannell was one of those people and years later has decided to offer up a couple of theories as to why he was ultimately fired.

Kannell was one of the top voices in ESPN’s college football coverage and the co-host of the Russillo and Kannell show. He recently sat down with his old co-host for ‘The Ryen Russillo Podcast‘ to reminisce on their time together and how things ultimately came to an end at the worldwide leader.

For Kannell, there are two specific things that stand out that may have led to his firing: a tweet and a hat.

Kannell decided to troll the SEC on Twitter, which isn’t the greatest of ideas given the network’s relationship with the conference. To be fair, too, the tweet was incredibly dumb.

“Possibly because the person who I upset the most was asking me to be suspended for a tweet because I was trolling the SEC,” Kannell explained on the podcast. “It did tick off somebody and even though I apologized, I don’t know if that person ever got over it. That person since that time rose up the ranks where they were really powerful and had some influence whether or not I was there.”

Your bosses being upset about a tweet, even if it’s just a joke about the SEC, is one thing, but Kannell also thinks a wardrobe choice played a role in his firing.

He wore a red hat that said ‘Make Radio Great Again’, which is of course a play on the ‘Make America Great Again’ hat former President Donald Trump wore.

“I don’t know if it helped, even though it was a joke, was wearing the ‘Make Radio Great Again’ hat just because it was red and it appeared like a MAGA hat even though it wasn’t,” Kannel said. “I’m sure there were people that might have walked by a TV and double-take. One of those two things probably put the final nail in the coffin.”

That was ultimately all she wrote for Kannell and plenty of other ESPN employees back in early 2017. Ed Werder, Todd Grisham, and Mark Schlereth are three other notable people let go by ESPN from 2015 onward as well.