How Was Justin Turner Allowed Back On Field During Dodgers Celebration After Testing Positive? 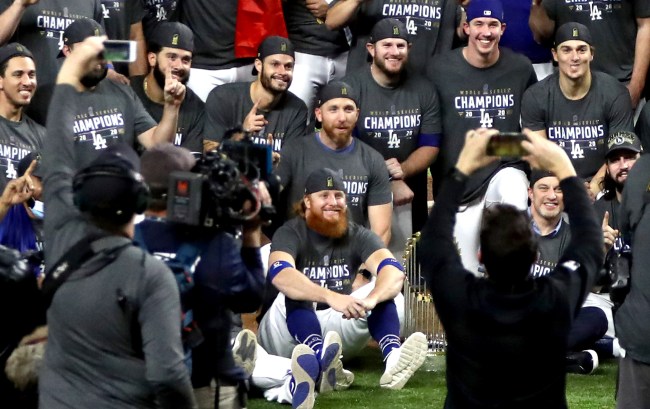 Because 2020, the final game of the World Series between the Dodgers and the Rays saw numerous things happen that could well be described as inexplicable.

There was Rays manager Kevin Cash pulling starter Blake Snell, a recent Cy Young Award winner, after he gave up just his second hit after striking out nine batters (with zero walks) in 5-1/3 innings as he was about to face four hitters who were a combined 0-for-8 with 7 strikeouts against him during the game.

There was MLB commissioner Rob Manfred appearing to slur his words during an interview after the game.

And then there was Dodgers third baseman Justin Turner testing positive for coronavirus and being forced to leave the game, much to the surprise of his teammates.

“I found out in the top of the ninth,” Cody Bellinger admitted. “[Edwin] Rios fielded a ground ball. I didn’t even know Rios was in the game … that was a shock to me.”

What was even more shocking, at least to fans, was the fact that Turner was right back out there on the field with his teammates and coaches, often not wearing a mask, celebrating the Dodgers’ victory.

Rob Manfred said Justin Turner was removed from the game in the 7th and “immediately isolated to prevent the spread” of COVID.

So how did this happen? pic.twitter.com/7967tswcpr

Literally the commissioner is there. Manfred letting this happen when he’s right there to stop it is bananas. The whole thing is bananas! How is this dude on the field after a positive COVID test while only sometimes wearing a mask? Did he get a rapid negative test? https://t.co/rE9Jx2L5x4

So, how was this allowed to happen?

According to ESPN’s Jeff Passan, it was for the usual reason why Major Lague Baseball lets its players get away with just about anything. The commissioner has no spine.

One general manager texted: “A superspreader event on live TV. Welcome to 2020.” A prominent player messaged: “what the f*** is going on.”

The answer: Turner ignored the protocol that calls for COVID-positive players to isolate. He did this with the support of his teammates and the organization. Next to nobody had been as important to the Dodgers as Turner over the last seven seasons. They had spent time in the bubble with him, ridden the bus to the stadium with him, shared the clubhouse with him. He was their leader. And if it meant taking the risk of contracting the virus, if it meant stoking the ire of those watching, those were consequences they were willing to suffer.

“Having a chance to take a picture with the trophy was incredibly important and meaningful to him,” said Dodgers president of baseball operations Andrew Friedman.

Thanks to everyone reaching out! I feel great, no symptoms at all. Just experienced every emotion you can possibly imagine. Can’t believe I couldn’t be out there to celebrate with my guys! So proud of this team & unbelievably happy for the City of LA#WorldSeriesChamps

Turner did more than just pop out for a quick picture with the trophy then head back to isolation as video and photos clearly showed.

UPDATE: MLB has issued a statement about Turner being on the field after testing positive.

MLB issued this statement regarding Justin Turner's positive test and what happened after the game.

"…it is clear that Turner chose to disregard the agreed-upon joint protocols…" pic.twitter.com/Qd4o0kpZVy