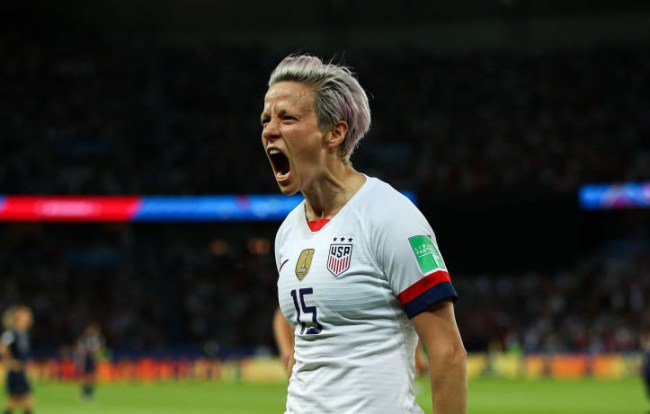 On Tuesday, we were treated to a rematch of the Revolutionary War just a couple of days before the Fourth of July in the form of the Women’s World Cup semifinal matchup between the United States and England.

When everything was said and done, history repeated itself after the American squad topped their crumpet-eating counterparts by a score of 2-1 and the English got their knickers in a bundle thanks to Alex Morgan’s fantastic tea-sipping celebration.

If you tuned in to the game hoping to watch Megan Rapinoe continue to run shit, you may have been a bit surprised to learn she wasn’t on the field, as the U.S. announced she wouldn’t be starting the game shortly before things kicked off.

OH WHEN THE YANKS…

There was some initial speculation that the move was a tactical one, as Rapinoe is known more for her offensive skills as opposed to her defensive talents. However, it didn’t take long for people to start freaking out when she didn’t take the field during warmups and no one had an answer as to why.

According to CNN, we finally got one after the game when United States coach Jill Ellis revealed Rapinoe was nursing a minor hamstring injury that prevented her from playing (although there was a chance she could’ve taken a penalty kick if the game had ended in a tie).

Thankfully, it appears the injury won’t prevent her from playing in the final on Sunday, where the United States will take on either the Netherlands or Sweden, who will face off against each other this afternoon.

I can’t wait to get my irrational patriotism on.