Ron Darling On Why Sherman/Jeter Overpaid For The Marlins 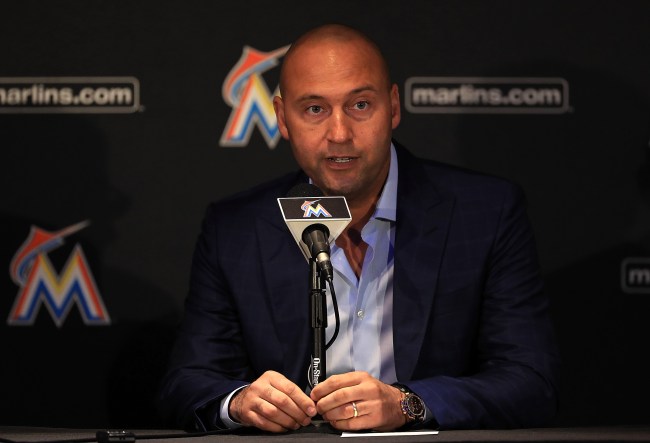 JohnWallStreet had the pleasure of attending the 34th Annual March of Dimes Sports Luncheon, presented by Ford (F). Attended by more than 700 leaders and influencers  in the sports business industry, the event raised $1.17 million for pregnancy and baby health research, education, vaccines and breakthroughs. JWS had a chance to catch up with ’86 Mets Star and current MLB broadcaster, Ron Darling, to discuss the rise in player salaries (and endorsement money) over the last 30 years.

JWS: As a player, did you understand that you were going to have to work once your playing career was over?

Darling: In my day, you certainly thought you were going to work after you were done playing. I always thought I would at 35 years old, still have something to offer.

JWS: When you look at the amount players make today, is there any jealousy or resentment there?

Darling: Whenever I think about the money made by today’s players, I never begrudge what they make. I think about Marvin Miller and the MLBPA, how hard they fought; how many great players, much better than I ever was, never made a nickel or a dime. I just think of all those players that came before, that fought so hard to get the players playing today all the rewards coming their way

JWS: When you made your first all-star game in ’85, did the endorsements start rolling in for you?

Darling: In the mid 80s, endorsements were not really moving the needle. You would get a thing here or there, but there was no branding in those days unless you were a superstar. You were very happy and fortunate with any nickel or dime that would come your way. It’s different today, there are certainly more opportunities; but it hasn’t changed in that the best of the best still reaps the most rewards and the more pedestrian players try to find a place in the market.

JWS: You signed a 3 year, $5 million contract with the Mets.Did you go on a spending spree or were you fiscally responsible?

Darling: I was extremely conservative. I was very lucky that I had a family to take care of. I only owned one car at one time, one house at one time, I didn’t have a posse to worry about; I think all players should be that way.

Howie Long-Short: Ron may not be resentful, but I’d imagine it’s difficult not to think “what if I was born just a few decades later?” Darling entered the league in 1984, when just 6 teams had a total player payroll of more than $10 million; the Mets carried a payroll of just $7 million that season. The team’s average salary was just shy of $283,000 and their highest paid player, George Foster made $2 million (Keith Hernandez had an average salary of $1.6 million). In 2017, 36 MLB players made more than $20 million; with 2 guys having made more than $30 million (Kershaw, Price).

Fan Marino: Derek Jeter traded Giancarlo Stanton (and $30 million) to the Yankees for Starlin Castro and 2 low-level prospects as the Marlins look to cut payroll from $115 million in ’17 to $55 million ’18. The new ownership group paid $1.2 billion for a franchise that lost $50+ million last season, hence the need for a fire sale. JWS got the chance to ask Ron why this group overpaid for the franchise if it meant having to strip it down to nuts and bolts?

Darling: I think because there are only 30 teams; sometimes you just want to throw your hat in the ring, you just want to be a part of an organization. You think, let’s become owners first and then we’ll figure out all the ramifications of what that means later. When you buy a team, and decide on a business model, that business model doesn’t always fit in with players’ salaries; so sometimes you must make some tough decisions. The business of baseball is much different than the aesthetics of watching it.

Twitch, the live-streaming platform most often associated with video games, has agreed to stream up to 6 live G-League (Gatorade sponsored NBA minor league) games each week (content will also available on demand), beginning on Friday Dec. 15th. Broadcasts will include interactive overlays (viewers can click a team name/logo for player, team, game and season stats), a loyalty program to reward viewer engagement during broadcasts (i.e. custom emotes for group chat) and the ability for users to provide their own live commentary (over the game feed) via the Twitch co-streaming feature. The Amazon-owned company with 15 million daily active users has been adding content beyond gaming competition; having recently launched 24-hour channels with Machinima (TWX) and CONtv (CIDM).

Howie Long-Short: While on the topic of e-sports, lifestyle and marketing agency Engine Shop, a subsidiary of Bruin Sports Capital, has acquired The Gamer Agency; a leader in esports strategy, tournament management, live broadcast production and digital distribution that has produced and broadcast +/-100 events in ’17. Bruin Sports Capital, founded by Jon Bon Jovi, raised a $250 million round in 2015; the world’s largest ad agency WPP, led the round. You can purchase WPP over-the-counter under the symbol WPPGF. Bruin Sports Capital owns a stake in On Location Experiences, the company that just acquired PrimeSport; it also invested in Courtside Ventures, an earlier stage VC firm that has invested in stockX and The Athletic.

Fan Marino: NBA Commissioner Adam Silver has gone on record stating he’d like to see changes in the way sports broadcasts are presented; pointing out the lack of live stats and chatter surrounding the broadcast, that gamers have become accustomed to. Silver specifically referenced Twitch in his September comments, so this deal doesn’t exactly come out of left field. Coincidentally enough, NBC stumbled in to presenting NFL games in a manner familiar to gamers this season; introducing Madden-cam (perspective most often used in video games, from behind the tailback) during a Patriots/Falcons SNF game that was played in heavy fog, which prevented traditional cameras from picking up the game action. The view has been widely praised and has since been used as the main camera angle in a SNF broadcast.

Planet Fitness (PLNT) is installing “digital plumbing” across its fleet of stores/franchises to support the company’s AI ambitions. Over the next several months, the company will be building a “digital engine”; collecting member data from connected equipment. By 2019, PLNT intends on introducing AI supported virtual coaches; designed to motivate members to remain engaged (and to continue paying $10/mo.) by monitoring progress. Customized exercise routines and nutrition regimes, based on member performance (from an initial baseline), will be included.

Howie Long-Short: Planet Fitness has grown revenue 136% over the last 5 years; including 12.1% YOY in Q3 to $97.5 million. The company also added 31 new stores during the most recent quarter. PLNT shareholders have been on quite a roll. They got the positive earnings report in November, learned Trump’s new tax plan should boost EPS by 25% and now find out the company is investing in technology that will reduce churn rates; critical for a business that operates on a month-to-month basis with no commitments. Plus, they’ll own the valuable data.

Fan Marino: If your New Year’s Resolution is to join a gym, chances are you won’t be there for long. 50% of Americans drop their gym membership by the end of January and just 22% make it through the 3rd quarter. Gold’s Gym says most people fall off the cliff after 39 days. PLNT has found a pain point, I’m optimistic that positive reinforcement in the form of visual progress can extend that time frame.