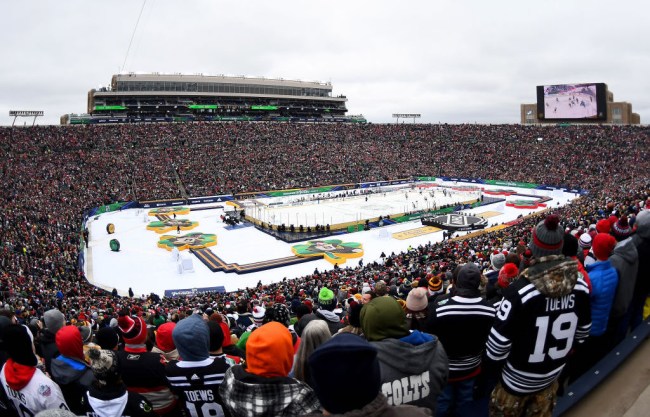 As someone who spent New Year’s Eve drinking alone in my apartment, I had no business being as hungover as I was when I woke up on Monday morning (in hindsight, doing a shot every time Ryan Seacrest introduced a musical act I’d never heard of was probably a bad idea).

Thankfully, the people responsible for entertaining the masses by scheduling athletic competitions on New Year’s Day were kind enough to give viewers a wide variety of options when it came to things to watch while regretting the decisions they made the night before.

There was no shortage of bowl games to choose from, but as a Boston Bruins fan, there was only one event I really cared about: the 2019 Winter Classic.

This year’s matchup with the Blackhawks featured two of the Original Six teams— complete with throwback uniforms— going at it during a game that had me on the edge of my seat as the Bruins eeked out a 4-2 win thanks to a couple of clutch power play goals that kept them in the game until they seized control at the end.

Oh, it also featured Notre Dame’s mascot wiping out on the rink which is one of those things in life that’s just objectively funny assuming no one breaks anything.

Temperatures were hovering around freezing over the course of the game, so it was only natural that fans would want to turn to an alcoholic beverage or four in order to keep warm.

Unfortunately, they hit a bit of a snag when they managed to drink the stadium dry —and exhaust its food supply— halfway through the contest (this may have had to do with the fact it was the second-largest crowd in NHL history).

People in attendance weren’t exactly thrilled (with at least person one severely underestimating how much Irish Catholics are capable of drinking).

lol they ran out of beers halfway through the second period. I’m katie nolan espnnnnnn

For the record, #WinterClassic ran out of food during the first intermission and they don’t have much beer left now. I haven’t eaten in three days and am probably gonna perish before I leave this place.

@NHL Huge fail at the Winter Classic @NDFootball today. Beginning of the 2nd period and they ran out of food and beer at the concession stands. People are pissed. Catholics don’t drink alcohol though so it’s ok.

#WinterClassic update: If you think Blackhawks fans could drink most/all of Notre Dame stadium out of beer by early in the second period, you’d be correct. pic.twitter.com/2ISV0lmp3H

If you thought Chicago’s blackout Wednesday drinking problem was bad, Notre Dame stadium ran out of beer 5 minutes into the first period of the Winter Classic 🍀🍻

Sold out of food and beer here at the #WinterClassic

I’d feel bad for the fans at the game if I hadn’t attended last year’s Pinstripe Bowl on the off-chance Boston College could be good at football for once on a night where frigid temperatures made the beer taps freeze and made me lose feeling in my feet for five hours.

At least the fans at the Winter Classic got the chance to drink the stadium dry and didn’t contract frostbite in the process.