The Wizards Are Open To Trading Everyone On Their Roster Because Players Are Beefing With Each Other In Practice, John Wall Cursed Out Coach Scott Brooks 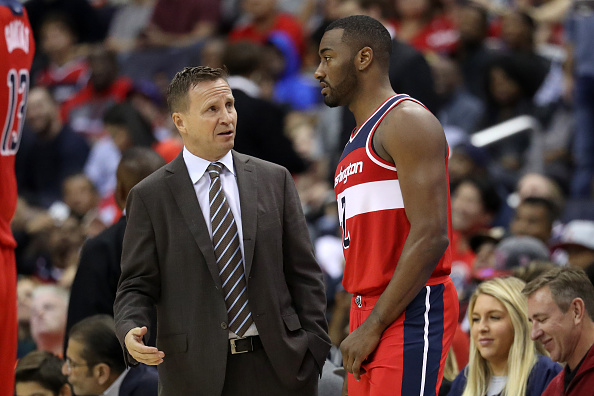 Early this morning ESPN’s Adrian Wojnarowski dropped a bomb when he revealed that the Washington Wizards were looking to implode their roster and were open to trading everyone on the team, including their two star players John Wall and Bradley Beal.

As the Washington Wizards’ season spirals, the franchise is making every player on its roster — including All-Star guards John Wall and Bradley Beal — available to discuss in trade scenarios, league sources told ESPN on Monday.

Washington’s preference remains to reshape the team around Wall and Beal, but poor play among key teammates is limiting their trade value and paralyzing the Wizards’ efforts to make meaningful changes to a roster that no longer appears functional together, league sources said

According to The Athletic’s Shams Charania, Wizards players have been getting chippy with each other in practice lately.

Sources on @TheAthleticNBA @WatchStadium: The Washington Wizards had a volatile practice within recent days, with verbal altercations among players and an exasperated Bradley Beal saying toward team officials: "I've been dealing with this for seven years."

Story filed to ESPN: The Wizards fined All-Star John Wall for unloading a verbal barrage onto coach Scott Brooks in a recent practice. After Wall and his teammates had been challenged to raise intensity in that session, Wall fired back with "F— you," to Brooks. Story soon.

Wall apologized to Brooks in the minutes after cursing him, and apologized to his teammates the following day, league sources tell ESPN. https://t.co/iih3oUT55D

It’s going to be tough trading John Wall considering that he has a huge contract and has a history of being a malcontent.