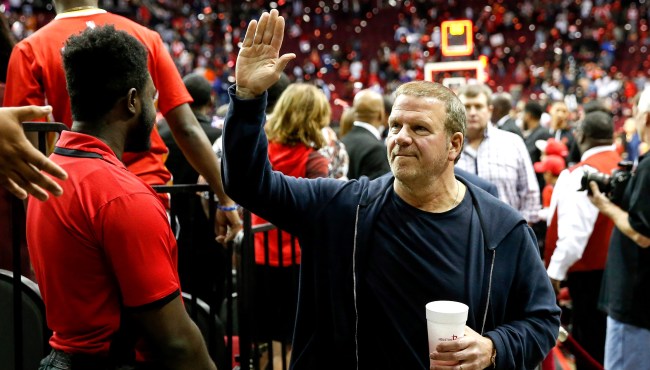 Being an owner or exscutive of a Houston-based professional sports franchise has been pretty brutal of late. The Texans fired their interim general manager. Rockets general manager Daryl Morey has had his issues. And Astros owner Jim Crane and his front office, well… we know how that’s been going.

Those problems were at least somewhat under their control or of their own doing. That’s not the case for Houston Rockets owner Tilman Fertitta who had his identity allegedly stolen by… a 27-year-old mom.

Yep, Stephanie Hunter, a 27-year-old mom, has been charged with felony offenses of fraudulent use or possession of identifying information and making a false statement to obtain credit for not only stealing the 62-year-old Fertitta’s identity using the dark web, she also snagged Walmart heiress Alice Walton’s identity as well.

Not ad. If you’re going to steal someone’s identity you might as well go big or go home. And go big she did, as Fertitta is reportedly worth $4.8 billion, while Walton is the richest person in the state of Texas with a net worth of $50.3 billion.

The real kicker? Hunter said she was able to obtain Fertitta’s social security number for “roughly $10.”

“It was, I mean, spur of the moment,” Stephanie Hunter said in an interview after her arrest. “I do apologize for it. It wasn’t something that I do on a regular basis or anything like that.”

Hunter said she bought Fertitta’s social security number on the dark web using Bitcoin and used it to open credit cards at Capital One Bank and Conn’s Home Plus.

Lifelock, an identity theft protection company, caught the suspicious account activity, alerted Fertitta and he called police before Hunter bought anything, according to court documents.

Hunter said it cost her “roughly $10” to buy his social security number, which she now calls “a dumb mistake.”

Police said Hunter also had the identities of “at least a dozen other potential victims.”

So what did she do with her ill-gotten access to money?

She claims the laptops and computers were used for her job in tech support for Apple and the she didn’t actually make any purchases, but she did try to buy some furniture.

Hunter, who admitted to buying the personal information, also says that stealing Fertitta and others’ identities was “a dumb mistake.”