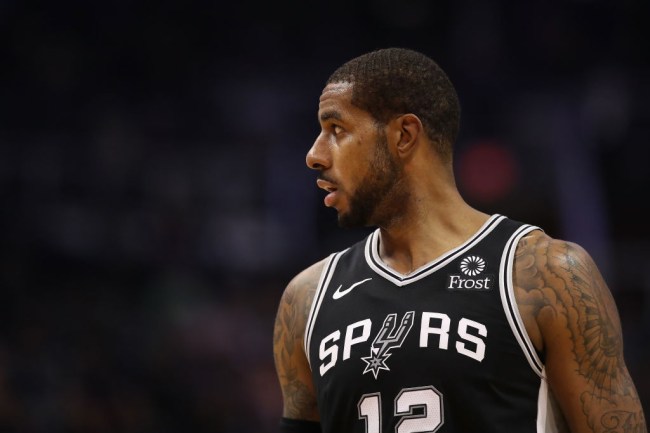 I’ve come to a painful realization today and that’s this: No one will ever look at me the way this chick sitting courtside looks at LaMarcus Aldridge. I could rescue the Pope from a burning building and as I lay him tenderly on the sidewalk out of harm’s way, he looks at me welling with appreciation before saying within earshot of the female bystanders, “Thank you guy who created the Netflix hit show This Is Us.” Even then, the most I’d get is a cursory glance up and down before the ladies realize I’m bordering on unfuckable.

In any event, what you are about to witness occurred at Monday night’s Spurs/Pacers game at San Antonio’s AT&T Center. The 6’11” Aldridge poured in 25 points on an efficient 9-12 from the floor. Impressive stat line, but a woman sitting up close and personal appears to only be concerned with what’s below Aldridge’s waist line.

LMAOOO that girl wanted some of Aldridge’s sauce. pic.twitter.com/EDntrX8sEB

Whether you’re male/female, black/white, Democrat/Republican, we can all agree that that look is the look of unbridled thirst. Like taking a bong rip after a sleeve of Saltines in the Sahara Desert thirst. A total undressing with the eyes. So much so that before I watched the video a second time, I put on a condom just for good measure.

Ok, this is getting weird. Let me defer to some funny reactions.

lmfao I pointed this out to my wife too. feel sorry for her man next to her. he’ll never measure up lmao pic.twitter.com/ZKku0LEsnW

“Really Kristen? We talked about this”

I have no idea if that’s her boyfriend or not but I’m going to assume the worst. Imagine being that guy–springing for two courtside tickets and ignoring calls from your buddies to join in favor of your lady, only to get cucked by your girlfriend. Tough draw.

Somewhere in an apartment building in San Antonio, that woman and her man are having the “talk.” Thoughts and prayers.