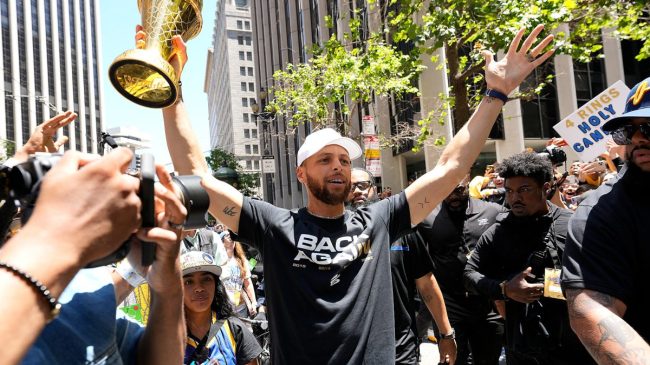 Being one of the best athletes in the world comes with a certain fandom. And while most sports viewers are relatively sane when being in the proximity of fame, there are definitely those that cross the line.

That happened over the weekend to the newest NBA Finals MVP.

A clip is making its rounds on social media of a woman trying to kiss Steph Curry at the Warriors’ weekend championship parade. The awkward video shows a random Golden State fan trying to get a little more than a photo from the star guard.

As Curry goes to pose for a picture with a few members of the parade crowd, this woman wraps her arms around his neck and just goes all in. You have to give her credit, she really went for it.

Curry quickly pulled away from the lady’s grasp and shrugged it off, though he didn’t look all that pleased by the unwanted attempt. It might’ve been his best step back of the year.

Still, he was nice enough to keep the photo session going with other fans while security stepped in to separate the woman from the superstar.

Fans were quick to react on social media.

As expected, most fans were in shock after seeing the woman go in for the kiss.

Others wondered what Steph Curry’s wife thought of the kiss.

Ma’am are you insane? His wife needs to whoop her ass. https://t.co/vplw5cklHH pic.twitter.com/paNQNDdhhq

While this was pretty wild in itself, it wasn’t the only headline from the parade.

The kiss wasn’t the only newsworthy moment in the parade

Klay Thompson and Draymond Green both made headlines while at the parade. Green’s, unsurprisingly, were more about his constantly dropping the f-bomb and calling out all of his haters.

Meanwhile, Klay went viral for chugging Hennessey from the bottle, nearly losing his championship ring, and accidentally knocking a woman over.

It was definitely a wild parade. The Warriors can continue to celebrate their NBA championship this summer. Then, they’ll try to win a fifth ring in nine years.