Woman Who Jumped On The Field, Flashed The Crowd After Being Crushed By Security At Super Bowl LIV Identified 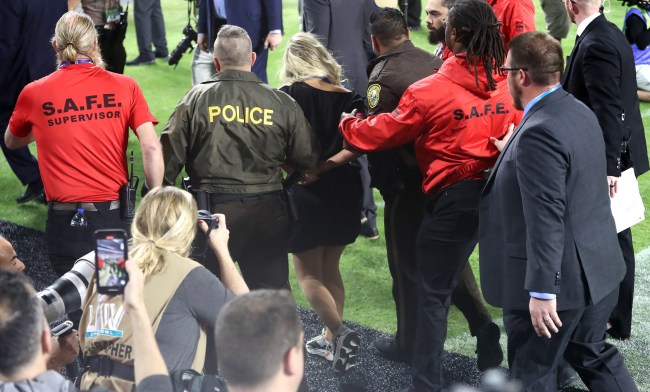 Can you imagine having tickets to the biggest sporting event on the planet, Super Bowl LIV, and doing anything other than actually sitting there watching the game as it is taking place?

For one thing, tickets cost a small fortune, so doing anything else, like, say sleeping through the game, is unconscionable, right?

What about trying to run on to the field? Does this seem like a good use of your Super Bowl ticket? The place is crawling with security, and you’re guaranteed to go to jail once you’re caught. And you will be caught. The least you could do if this is your plan is wait until near the end of of the game so you get your money’s worth, right?

Well, someone should have told that to a woman who not only had seats at Super Bowl LIV, they were good enough for her to be able to try to run on to the field.

She didn’t get very far. In fact, she didn’t even make inside the white lines before Hard Rock Stadium security laid the smack down on her.

I wonder how that turf tastes.

The woman was later identified as Instagram model Kelly Kay. I/m not quite sure what her goal was in trying to get on the field. Maybe she was going for some viral internet fame the way model Julia Rose and her friends did by flashing the camera during the World Series.

On the way out, she did at least get to flash her thong to all the onlookers so I guess it wasn’t a total L for her.

Hope it was worth it.