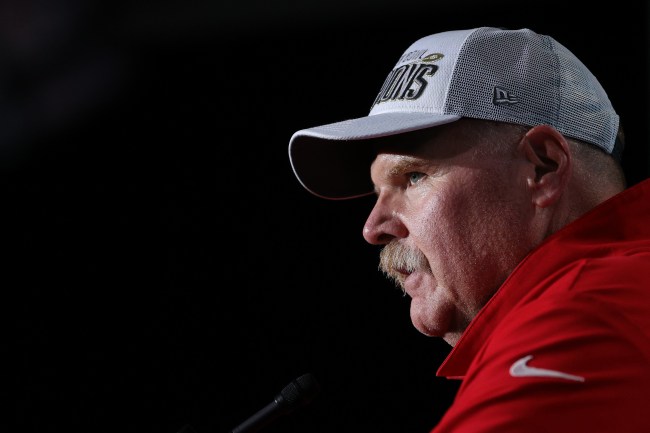 Andy Reid finally coached his way to a Super Bowl win and kicked the stat of being the winningest coach in NFL history….without…a Super Bowl title.

He had 207 regular-season wins and 15 postseason wins (14 postseason losses) coming into Super Bowl LIV against the San Francisco 49ers but he’ll never have to answer questions again about why he hasn’t won a Super Bowl yet because that walrus of a man brought Kansas City, Missouri its first SB title in 50 years.

I was ‘yesterday years old’ when I found out Andy Reid is a Mormon which I guess partly explains why we weren’t seeing him spray champagne everywhere throughout the celebrations. I didn’t see any chocolate milk in his celebration either so maybe I’m just jumping to conclusions here.

What we do know about Andy Reid’s Super Bowl celebration is it involved ‘the biggest cheeseburger you’ve ever seen’. Possibly a double. Possibly double cheese. Here’s Andy talking about his impending burger feast not once but twice.

It’s unclear where in Miami Andy was going to get his cheeseburger. Burger & Beer Joint in Brickell has a 10-pound burger (not listed on the menu) for a cool $125. If Andy was really serious about crushing the biggest cheeseburger anyone’s ever seen then I hope someone told him about that option.

Side note, this is the best Andy Reid clip of the past 24 hours:

Blue Collar in MiMO also serves up one hell of a burger with their NY strip streak blended meat. That burger’s served on top of English muffins which I actually came to love in NYC.