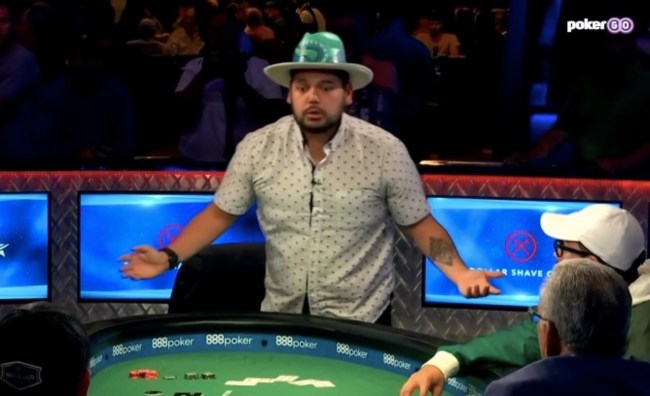 The 2019 World Series of Poker is currently underway at the Rio All-Suites Hotel and Casino in Las Vegas. This year marks the 50th Main Event which is a huge milestone for the WSOP but there are 89 events in total running from back on May 29th and culminating on July 15th with the final $5,000 No-Limit Hold’em Event #89.

EIGHT different poker games are played in this one tournament with the game rotating three times each level. In this hand, we see them playing ‘2-7 Triple Draw’ where the object of the game is to make the WORST possible hand without getting a straight or a flush.

In this hand we see Yockey re-raise the bet to $450K into Arieh who is the table chip leader at the time with 10.7 million in chips. Behold one of the worst bad beats in WSOP history, possibly the worst bad beat ever because the hand with a 99% chance of winning got busted:

But it wasn’t all doom and gloom for Yockey. He finished the $50,000 entry Poker Players Championship in 4th place and took home a paycheck of $325,989 for his troubles and 515.5 points towards the WSOP Player of the Year race.

Today, July 3rd, will see events WSOP #73 and #74 kick off at the Rio which means there are less than 20 events left this year. Flight A of the $10,000 Main Event begins today, the one that EVERYONE wants to win so keep your eyes peeled for news on that.