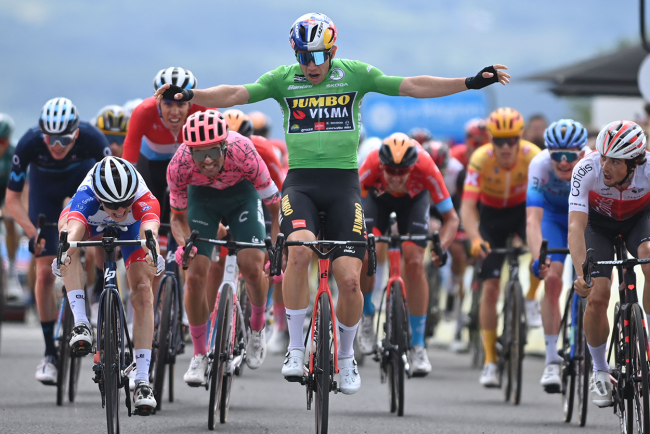 Wout van Aert lost in incredibly embarrassing fashion on Tuesday. The 27-year-old Belgian cyclist celebrated early and got beat at the finish line. It was brutally hilarious.

During the third stage of the Critérium du Dauphiné cycling road race in southeast France, a huge pack came to the finish line with a chance to win. It was a sharp uphill finale that flattened out at the finish.

When the group powered forward down the final 100 meters for what was set to be an epic photo finish, Van Aert was able to fend off his competitors for the win. So it appeared, at least.

With a small lead on the rest of the pack, Van Aert pulled up to celebrate and held his hands to the air. As he did so, he got passed and lost.

David Gaudu, who was on Van Aert’s back wheel as the celebration began, kept his legs moving and slipped right past the leader for the win.

It was epic for Gaudu and incredibly embarrassing for Van Aert.

After the devastating finish, Van Aert said that it was a rookie mistake.

“On such a rising finish you lose a lot of speed when you celebrate. It happened in a split second and David Gaudu came from the other side…it’s just painful. I’ve seen it before with other riders. You sometimes laugh about it but now I’m the loser.”

The loser he was indeed.

To make matters worse, Van Aert lost by two seconds in the time trial on Wednesday.

🏁 That was close! 🇧🇪@WoutvanAert fought until the last meters to win the ITT.
⏪ Relive the last kilometre of stage 4. pic.twitter.com/led2WUG3zl

However, the spirits are still high because Van Aert holds the yellow jersey. If he goes on to win the Critérium du Dauphiné, his celebration blunder will be forgotten. If not, it will haunt him forever.