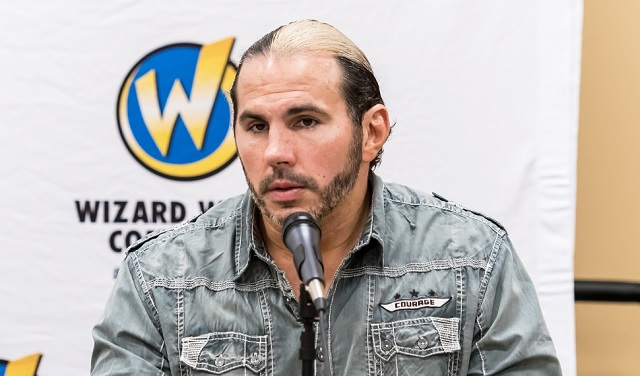 During AEW’s All Out event on Saturday night, wrestler Matt Hardy was supposed to be slammed into a table by Sammy Guevara from an elevated platform but unfortunately, both wrestlers missed the table and crashed into the concrete floor.

Hardy appeared to be knocked out cold during the broadcast.

The match continued after Hardy regained consciousness and was cleared to return by AEW doctors but he was later taken to the hospital for further evaluation.

Tony Schiavone has just said the match was restarted because Matt Hardy was cleared by the doctor after the match had been called off, and that both he and Sammy Guevara will be okay.#AEWAllOut

Matt Hardy on his way to the hospital.

Matt Hardy is on his way to IRL hospital and likely to undergo X-rays/concussion protocol/testing, he may also have a fracture of some sort. 🙏🏾#AEWAllOut https://t.co/wTLDMffRtZ

Reports are out there that Matt Hardy went to the hospital. Give a real update on that match, not a kayfabe one.

AEW really dropping the ball on this.

Fans were not happy with AEW for allowing the match to continue after Hardy was clearly injured after the incident.

After that Matt Hardy bump @AEWrestling should hang their heads in shame. Match should have been stopped soon as it happened. @TonyKhan surely needs to take action #AEWAllOut

. @AEWrestling blatantly lying about the condition of Matt Hardy when it is being reported he's on his way to hospital with a suspected serious concussion is way worse than not using a copyrighted name on Twitch.
Get it together IWC#AEWAllOut

#AEW is so unprofessional that it's not even funny anymore. I hope Matt Hardy is okay what a disgrace..

With @bryanalvarez reporting Matt Hardy is on his way to the hospital, that was an awful job from AEW to not protect their talent. Accidents happen, but allowing that match to continue takes it from being just an accident to being negligence. #AEWAllOut