Once Dubbed The ‘World’s Largest Athlete,’ WWE’s The Big Show Has Dropped A Ton Of Weight And Now Has A Six Pack 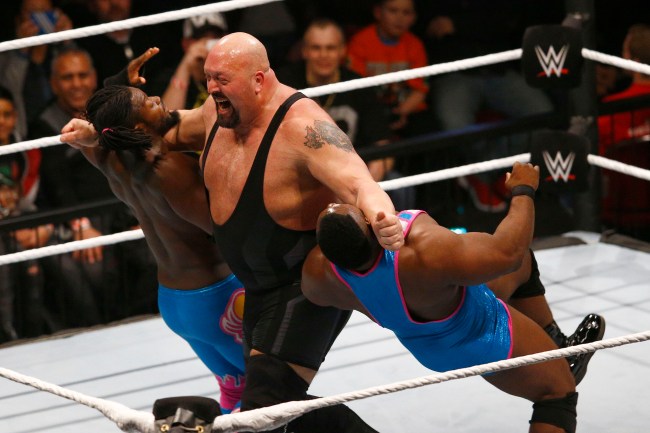 Growing up, there was no figure in WWE more imposing than the Big Show. The seven-time world champion has been billed the “world’s largest athlete” for much of his two-decade career, standing 7 feet tall and weighing close to 500 pounds.

Although a spectacle to watch in the ring, Big Show’s health was suffering from an awful diet and poor training techniques. The 45-year-old’s ballooning weight was, in part, caused by a a tumor that formed on his pituitary gland during childhood. With his livelihood on the line, Big Show decided it was time for a change.

“It was definitely a conscious decision. You don’t make the transformation I’ve made without a serious commitment to changing 40 years of improper diet and improper training,” he recently told WWE.com.

Big Show joined forces with celebrity trainer Dodd Romero, who has worked with Denzel Washington and Alex Rodriguez, and chalked up a plan that included swimming, cycling, and weight training, according to New York Post.

@Shaq! Karaoke? Doughnuts? You better get serious. All roads lead to #WrestleMania. The only giant!

“Right now, mostly, everything I count on is high-rep. I’m not trying to build muscle right now, I’m trying to keep my metabolism up, keep my tendons strong, keep my joints good, and cut a lot of fat.

“We’ll get to the muscle-building end of it once I get my body fat down to where I want it to be. … Those who weight-train know what I’m talking about. Lower reps with heavier weight will be more for building muscle. Right now we’re just trying to burn it up and keep it high-energy so the fat doesn’t have a chance to stick and grow.”

With the help of Romero, Big Show has dropped more than 60 pounds, attributing “90 percent” of his weight loss to improving his diet–cutting out pizza, ice cream, and meatball subs.

‪With my trainer Dodd. We're training for 'Mania — hope you are too, @Shaq. #CountingTheWeeks

“Will I end up ever looking like John Cena or The Rock or Triple H? No,” he said. “But I can take the assets that I have and try to accentuate them.”