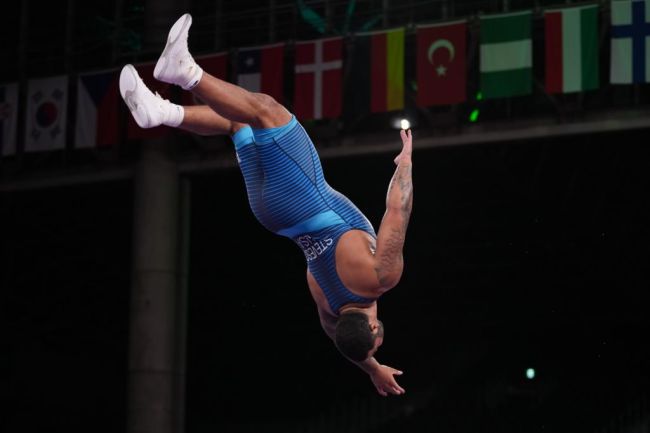 Heavyweight freestyle wrestler Gable Steveson has always dreamed of winning a gold medal at the Olympics and wrestling in the WWE. Now, at age 21, he is accomplishing both of his dreams.

Steveson told ESPN that he has signed a multiyear deal with World Wrestling Entertainment, just 34 days after standing atop the podium in Toyko. He will be the company’s first gold medalist since Kurt Angle in the late 1990s.

At 6-foot-1, 275 pounds, the University of Minnesota wrestler pulled off an epic walk-off victory in the closing seconds of the gold medal match at the 2020 Games last month. To celebrate, Steveson hit a casual backflip with SERIOUS vertical for his size.

He did the same thing back in March when he won the NCAA National Championship in the 285-pound class.

Steveson has one year of collegiate eligibility remaining and has always been a fan favorite amongst the Gopher faithful. His popularity has only skyrocketed since his gold medal win and his big personality is destined for greatness in the WWE.

However, before he heads out into the professional ring, Steveson is returning to Minnesota. He has his sights set on back-to-back national championships.

The NIL deal allows him to return to Minneapolis for his senior year to defend his D-I heavyweight title while learning the ins-and-outs of the WWE. To do so, the WWE will set up a remote training facility for Steveson near campus.

There, he will learn the finer points of in-ring work with WWE coaches. Upon his graduation, the multiyear talent contract with the company will begin.

He will be a full-time performer with WWE but is also set to appear on the company’s programming throughout the school year.

“We all saw his physical ability prior to and at the Olympics,” said Nick Khan, WWE president and CRO to ESPN. “What we also saw was that Gable has as much charisma as he does ability. Marketability and ability are both of great importance to us.”

“This is just the starting line and nowhere close to the finish line. So our investment is based on how much we think of Gable now and how much bigger we think he can become.”

Per ESPN, the UFC also had interest in Steveson but wanted him to gain experience on the regional MMA scene before competing for a contract on Dana White’s Contender Series. Steveson, who has looked up to guys like Brock Lesner and Paul Heyman since he was little, said he knew nothing of that plan and has always wanted to be a part of the WWE.

“Being able to learn how to take bumps and with the wrestling background I have right now, I think I can adapt to all of it really quick,” Steveson said to ESPN. “I think with the charisma and the confidence and the attitude that I bring to the wrestling mat, it will translate over to the WWE really fast, and I feel that I can … go on screen and have a good role and know what to do perfectly.”

He calls Lesner, who also won a national championship a Minnesota, a great mentor and already has his sights set on a WrestleMania match against him.

The WWE has a rich history of turning top freestyle wrestlers into stars and Steveson hopes he will be the next.