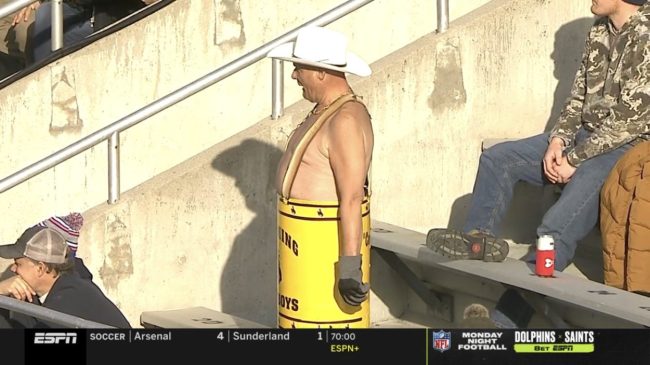 Some bowl sponsors want to sell you mortgages or do your taxes. Others specialize in esoteric fields like cyber capabilities or digital forensics. Potato Bowl just wants you to eat potatoes.

Each year since 1997, the game has been held at Albertsons Stadium on the campus of Boise State University in Boise, Idaho. It plays host to a team from the Mid-American Conference and a team from the Mountain West.

This year, it pitted the Kent State Golden Flashes against the Wyoming Cowboys. Kent State finished second in the MAC, while Wyoming finished ninth in the Mountain West. It’s beautiful.

Prior to the game, the Bowl’s mascot, Spuddy Buddy, met with Wyoming’s Cowboy Joe mascot for a wholesome prank. Spuddy pretended that he was stuck and could get up off of the turf.

Not long thereafter, the game got under way.

Both teams wear uniforms that feature a lot of yellow, so the color scheme on the blue turf is absolutely wild. It is a mental pretzel trying to figure out what is going on, as it should be.

When the game kicked off on Tuesday afternoon, the temperature in Boise was hovering around 40 degrees. While that would be cold for the vast majority of people, it was anything but for one avid Cowboys fan.

The camera cut to the stands early in the first half and showed a man, completely shirtless, wearing a cowboy hat, winter gloves and some sort of overall get-up.

This is the peak male form pic.twitter.com/bGAWJw9dvS

He might be too prideful to admit that he is cold, but his runny nose would beg to differ.