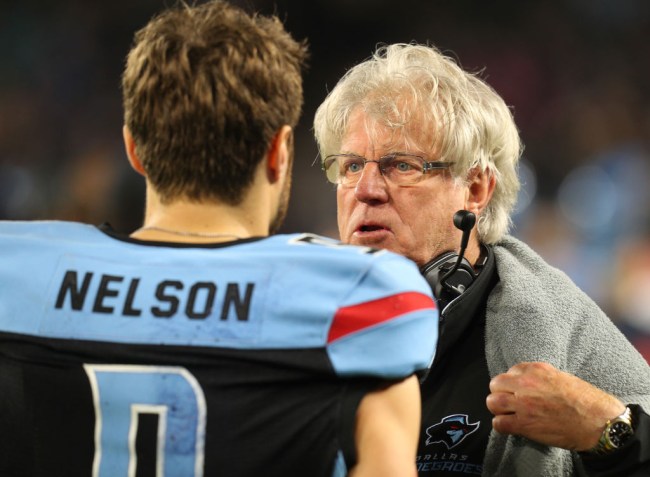 Every athlete knows there’s a chance they’ll succumb to a nasty injury whenever they step onto the field/court/ice but I’d argue there aren’t any players who are constantly thinking about the occupational hazards that come with their sport more than the guys on the gridiron.

With the exception of boxers and MMA fighters who’ve signed up to get the shit beat out of them for a living, football is probably the most brutal sport you can participate in and every player knows there’s a chance they’ll be on the receiving end of a monster hit or a questionable block every time the ball is snapped.

As a result, it’s vital to keep your head on a swivel, but as we’ve learned time and time again, it’s not just players who need to follow this advice, as plenty of people who aren’t on the roster have also fallen victim to some huge collisions over the years, whether we’re talking about unsuspecting cameramen, cheerleaders, or trombone players.

On Sunday, the Dallas Renegades and the Houston Roughnecks faced off against each other and Renegades offensive coordinator Hal Mumme had already had a pretty rough day by the time the second quarter rolled around thanks to Landry Jones, who threw three interceptions on the first three drives of the game.

However, things got even worse for Mumme when he was barreled into by his running back Cameron Artis-Payne and suffered a broken leg as a result.

I think most people would’ve understood if he’d wanted to leave the game to get that taken care of, but on Monday, the Renegades revealed he opted to stay on the sideline and keep coaching in what turned out to be a losing effort.

The @XFLRenegades confirm that OC Hal Mumme broke his leg last night on this collision with Cameron Artis-Payne. That means he spent 2.5 quarters calling plays from the sideline with the injury. @SportsDayDFW pic.twitter.com/S3mg0NgxFh

After the news broke, Mumme addressed his thought process with three simple words.

That is Peak Football.