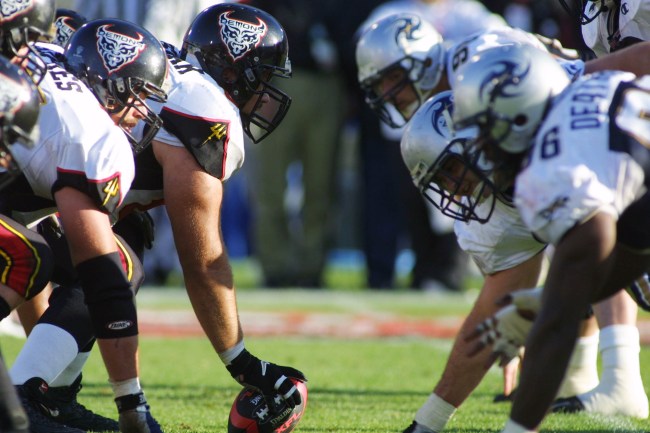 The XFL’s making its triumphant return next spring when the Vince McMahon-launched league comes back after a nearly 20-year hiatus. And while there are still lots of things to be sorted out between now and the time the XFL kicks off in 2020, there are a few things that the league’s bringing to fans to try and put the best product on the field.

One of those things was recently announced at an XFL Summer Showcase, where the league’s commissioner, Oliver Luck, confirmed a unique idea called Team Nine. With the league having eight teams already, this ninth team will have 35-40 players which represent all positions, with the purpose to keep players in shape and ready to join one of the other active rosters if needed. Basically, it’s like a player pool for when a guy gets injured or something else happens, with the Team Nine guys being ready to step right in and play, rather than come right off the street.

Here’s what Luck has to say about the awesome idea, per Pro Football Talk:

“What we want to try to avoid is our teams having to sign players off the street,” Luck said. “Example, Dez Bryant signed with the Saints this past NFL season, the first ten minutes of . . . that particular practice he tears an Achilles [tendon]. And so we want to avoid that. That’s quite honestly a costly Workers’ Compensation claim, so we want to have a group of guys that will be based in Dallas who basically are staying in shape. . . . We think that because of our 25-second play clock our game is going to require quite honestly a little bit better conditioning than what some of these guys may be used to in the NFL or the CFL. So it’s important that these guys are in shape, and it’s hard to stay in football shape on your own. That’s been one of my beliefs. You need to be around others.”

This is a pretty brilliant play by the XFL, with Luck referencing how this could help eliminate workers’ comp issues, as well as making the quality of player as best as possible. It also gives those players on Team Nine an opportunity to stay involved in the league, with resources and facilities to train just in case their name gets called to join one of the eight teams.

Although this idea won’t decide the overall success of the new XFL coming back next year, it proves that the league continues to think outside the box when it comes to trying things. We saw a lot of ideas that the original XFL adapted stick with mainstream leagues like the NFL, NBA and MLB — like the on-field camera angles — so maybe this is something else that those leagues could look into doing as well.