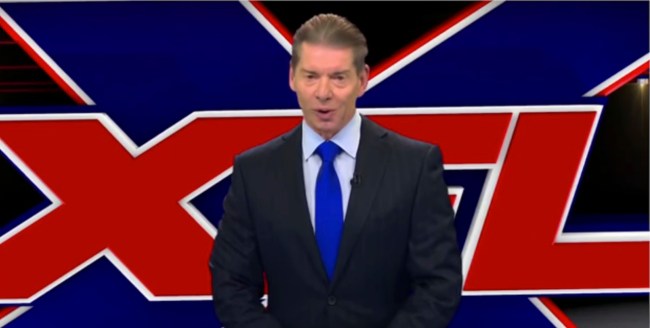 The XFL was one of those great sports experiments that gave us one year of memories back in 2001, introducing us to players like Rod “He Hate Me” Smart, reviving quarterback Tommy Maddox’s career and giving us behind-the-scenes production that was way ahead of its time. And, although the WWE-backed and Vince McMahon inspired pro football league flopped 18 years ago, as we all know by now, the XFL is coming back in 2020, looking to implement a whole new brand of football.

Following the failures of the Alliance of American Football (AAF), the XFL is hoping to learn a few things about the league that led to its demise. While the play on the field was entertaining and ratings seemed to be healthy, the AAF’s lack of funding ultimately led to the end. But with the XFL having the billionaire wrestling mogul Vince McMahon leading it, the league hopes that it doesn’t suffer the same fate as the AAF. The XFL’s also giving fans the chance to help the league succeed — because there’s currently a poll for people to vote on for some of the wild and crazy sh*t that McMahon hopes to implement into the league.

In an badass move, per XFL2K.com, the XFL, which is touting itself as “warp speed football reinvented,” has a series of potential ideas that fans can potentially influence into existence. From things like no timeouts, no kickoffs and no game clock, among others, the XFL is definitely separating itself from the NFL in giving some control to fans.

this one is VERY interesting …. pic.twitter.com/zNw34cyUiK

Here are a few of the suggested XFL ideas for fans to vote on, which seem both awesome and unique in a way only Vince McMahon can do.

With the WWE already having an enormous following and fan support, it’s interesting that the survey was sent out on the longtime wrestling federation’s Fan Council to help get votes for the XFL. And, considering we saw an all-out wrestling match between two players for the first possession of the football in the previous version of the XFL, seeing the league continuing to re-imagine how the game can be played is both awesome and terrifying. But, hey, it’ll be badass to see which rules stick.