XFL Announces It Will Use One, Two, And Three-Point Conversions, Is Open To Signing John Manziel 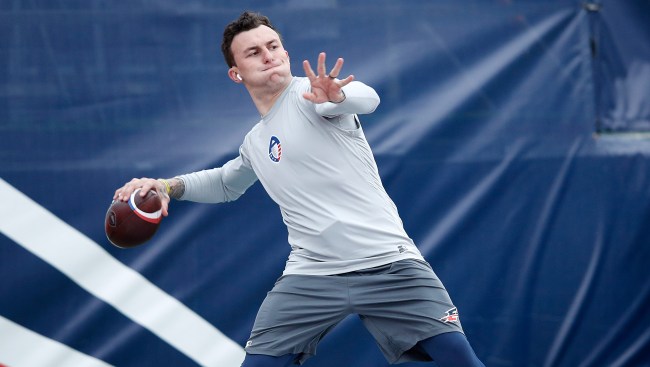 Following announcement of The Alliance of American Football folding before completing its first season, the XFL has been taking full advantage of the press relating to alternative football leagues.

After a report that the AAF went to none other than Vince McMahon seeking help and asking him to buy their league, XFL commissioner Oliver Luck (yes, that’s Andrew’s dad) went on Monday’s PFT PM podcast and made even more shocking revelations regarding McMahon’s rebooted football league.

The biggest of which is the fact that teams that score a touchdown in the XFL will have three options, instead of the normal two, when it comes to points-after-touchdown – and none of them involve kicking.

Luck said that the league considered moving the three-point conversion to the 15, but that the coaches believed defenses would more easily defend the end zone with that much territory to cover.

By comparison, the AAF only had one option following a touchdown, a two-point conversion attempt. (Again, no kickers.)

Commissioner Luck also discussed the possibility of the XFL signing much-maligned quarterback John (Not Johnny) Manziel – the man who has played for the Cleveland Browns, the South team in the Spring League, the Hamilton Tiger-Cats and Montreal Alouettes of the CFL, and the Memphis Express of The AAF, since being drafted by the Browns in 2014.

“If he is able to meet our standards and if our coaches think he’s one of the top quarterbacks out there that can help us,” Luck told Mike Florio of PFT. “Certainly we have no reason not to believe he couldn’t be in the mix. But again it’s really up to our coaches in terms of the quarterbacks they wanna take a look at.”

Considering that, as of this writing, 14 AAF players have already been signed to contracts by NFL teams (including Garrett Gilbert by the Browns and Luis Perez by the Eagles), the XFL may just be John Football’s last chance at playing the sport professionally.