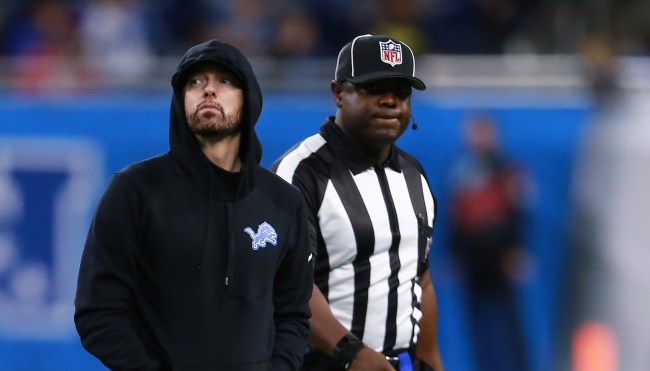 On Monday, rap gawd Eminem tweeted a request to the Alliance of American Football.

He would really like to see the new football league be more like the NHL and allow fighting to take place during games.

DEAR @THEAAF,
PLEASE ENTERTAIN THIS THOUGHT REGARDING THE @AAFIRON @AAFEXPRESS GAME: ALLOWING THE PLAYERS TO ACTUALLY FIGHT WOULD BE KEY TO LEAGUE’S SUCCESS LIKE HOCKEY, I WOULD WATCH EVERY GAME (EVEN THOUGH THERE IS NO DETROIT TEAM YET – HINT). DON’T BLOW IT.
SINCERELY,
MARSHAL

(Em really likes tweeting in ALL CAPS when he’s passionate about something.)

His suggestion to add fighting will never happen. One, the AAF is not the XFL. And two, the AAF is way too tied into the NFL to ever let anything like that take place.

That doesn’t mean it’s a bad idea, however. Not sure how it would work with helmets and all, but maybe ripping off a player’s headgear would be the equivalent of pulling a guy’s hockey jersey over his head.

Perhaps if this fighting rule Eminem suggests were to be implemented, scenes like Johnny Manziel calling an opposing player a “bitch ass” would have devolved into fisticuffs.

Especially, when you consider Johnny Football’s response to Eminem’s tweet.

As for Detroit getting an AAF team, Charlie Ebersol, the founder of the league and current CEO, is all ears.

Detroit is not a bad idea for a future franchise. Let me know if you want in on it.

My life has taken a decidedly surreal turn. #jointhealliance Is @theaaf now headed to #8Mile ? https://t.co/rsi8w5lYoD