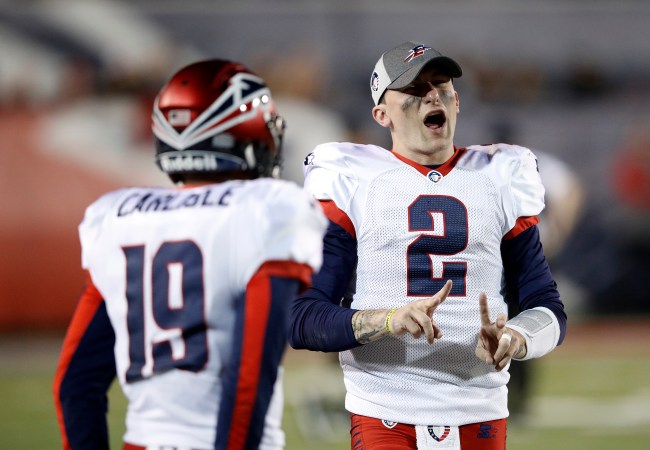 Johnny Manziel is back!

Tonight Manziel made his AAF debut as the backup QB for the Memphis Express and was able to start off strong with a solid scramble on his first play in the game.

HERE'S JOHNNY. @JManziel2 now under center for the @aafexpress on @nflnetwork 📺. pic.twitter.com/0FWDaDh5BE

Johnny was also able to convert 36 yard completion on the same drive.

Johnny Manziel is in at QB for the Memphis Express. His first completion in @TheAAF went for 36 yards.pic.twitter.com/czB8TSjGIU

Manziel didn’t see much playing time in the second half but he did get into it with trash talking opponents. Here is Johnny calling an opposing player a “bitch ass” for mocking his money sign celebration during the game.

Update: Manziel currently micd up saying he’ll turn up on their bitch ass and got into a little scrum. Some things never change lol

Unfortunately for Manziel the team’s starting QB Brandon Silvers led the Express to a big comeback in the fourth quarter.

Silvers eventually was able to throw the game-winning touchdown in overtime.

Manziel seemed genuinely happy for his new teammate despite being forced to watch the team comeback while on the sideline.

Johnny Manziel the first one to congratulate Brandon Silvers after Silvers leads Express to OT win.