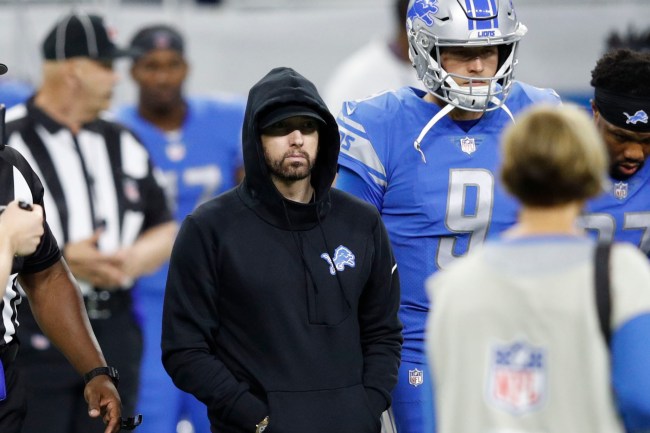 Eminem has a ingenious idea for the Alliance of American Football (AAF) that the first-year league might want to seriously consider. No, it’s not having a wrestling match to determine which team gets the ball first like the old XFL did — which was dope, by the way — but he wants the league to allow fights like the NHL does, believing that it would make the games even more entertaining.

Although the AAF has seen pretty solid ratings since Week 1, here’s what Eminem suggested to the league to beef things up a little bit.

DEAR @THEAAF,
PLEASE ENTERTAIN THIS THOUGHT REGARDING THE @AAFIRON @AAFEXPRESS GAME: ALLOWING THE PLAYERS TO ACTUALLY FIGHT WOULD BE KEY TO LEAGUE’S SUCCESS LIKE HOCKEY, I WOULD WATCH EVERY GAME (EVEN THOUGH THERE IS NO DETROIT TEAM YET – HINT). DON'T BLOW IT.
SINCERELY,
MARSHALL

Eminem’s tweet comes on the heels of the Birmingham Iron and Memphis Express game from this past weekend, when mics caught new Express quarterback Johnny Manziel talking trash to an opponent by saying he’d “turn up on his bitch ass.” Clearly, allowing the former Heisman Trophy winner to duke it out with a linebacker would be the way to really settle the score here.

Seeing as how the AAF has experimented with a bunch of different things that other pro football league’s haven’t — like the 4th-and-15 option for a trailing team instead of making them go for an onside kick — maybe Eminem’s suggestion will be something the league actually considers. OK, that’s doubtful seeing as how the Alliance of American Football hopes to work more with the NFL to develop players and such, but, hey, at least Em’s thinking outside the box.

THE GOAT HAS SPOKEN

THE LORD HAS SPOKEN…

Seeing a couple teams going at it at least once a game would be pretty awesome, right? I kind of envision it being like the news station battle from Anchorman, where there’d suddenly be tridents and machetes being used somehow. Maybe that’s a little too violent for the AAF, but with the XFL coming back next year, could Eminem’s wish be granted by the king of showmanship, Vince McMahon? Hmm…?