Eminem Lashes Out On Twitter, Angrily Slams Netflix, In ALL CAPS, For Cancelling ‘The Punisher’ 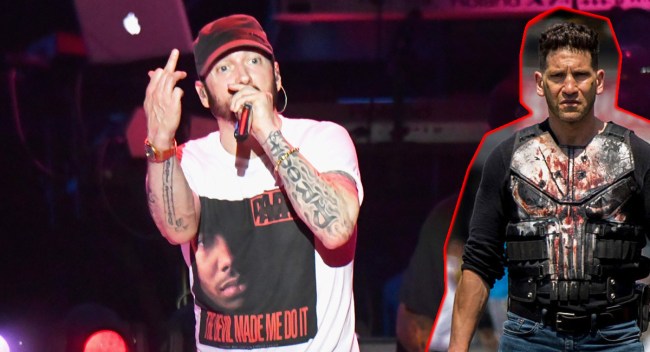 Full disclosure: I used to be a pretty hardcore Marvel and DC Comics fanboy.

These days, I will still go see most of their movies in the theater (Ant-Man and the Wasp was the first one in years I did not). And I used to watch each and every TV show… until there literally became around 20 of them on the air.

Now I just wait for them to show up on Netflix or some other streaming service and get to them when I get to them (Agents of SHIELD and Gotham being the only exceptions, but the latter’s days are about over.)

However, the comic book-related series that I have almost always watched right when they came out on Netflix were their Marvel shows Daredevil, Jessica Jones, Luke Cage, Iron Fist, The Defenders, and The Punisher.

So yes, I was pretty upset when Netflix pulled the plug on all of them. (Though I still hold out some hope for a revival somewhere else.)

I was especially upset by the cancellation of Iron Fist because the series left us with SO MUCH hanging at the end of the final episode of season two. Daredevil and Luke Cage didn’t do that as much, so the loss of them isn’t as painful, and who knows what Jessica Jones will do?

As for The Punisher, it was easily the most gritty show, had the darkest characters, and a true anti-hero in the story’s main character Frank Castle. I am really going to miss all of that.

And so is Eminem apparently… with good reason.

Back in 2009, according to The AV Club, there was a comic book published called Eminem/Punisher #1 (there was no #2).

The story begins… “Eminem is performing at a concert, and once the show is concluded, he leaves in a limo. They are stopped by the Punisher who is standing right where they need to go. Eminem and his crew get out angrily to move him out of their way, but Punisher merely opens fire on them, killing many of them.”

Also, who knew Eminem had superpowers?

So yeah, Marshall Mathers III of Earth-TRN194 has reason to be upset.

Taking to Twitter when he found out the news of The Punisher being cancelled, Eminem wrote, “DEAR @NETFLIX, REGARDING YOUR CANCELLATION OF THE PUNISHER, YOU ARE BLOWING IT!! SINCERELY, MARSHALL.”

REGARDING YOUR CANCELLATION OF THE PUNISHER, YOU ARE BLOWING IT!!

So… I guess we know what to expect next, right?

Just as soon as he’s done beefing with Machine Gun Kelly, of course.