Machine Gun Kelly Responds To Eminem Ripping Him At A Concert, And Eminem Fans Are Pissed 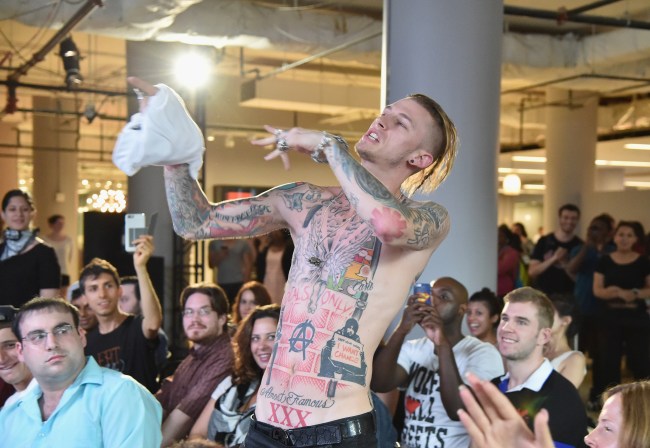 [Please take joy in noting the dude in the sky blue collared shirt in the bottom left corner of the photo above. Dude’s like “Take me behind the shed and put one between my eyes. I knew I should have went to Barry’s place to play Magic The Gathering instead.”]

So yesterday, Eminem extended his beef with Machine Gun Kelly at a concert in Brisbane, Australia when fans began chanting for him to perform “Killshot,” the record-breaking diss track Eminem created aimed at the Cleveland rapper.

Eminem refused to perform the song, most likely because he probably doesn’t remember the lyrics, but indulged fans with a jab at MGK.

“I would but I don’t want to give that cocksucker any more fucking light,” he told the crowd. “Make some noise for your-fuckin’-selves and make nothing for MGK.”

Check out the video here.

ay @Eminem u made the right decision not dropping that weak ass song in concert and putting everyone to sleep. 😂👎🏽🚮😈 #RapDevil

That “weak ass song” had the largest debut of any hip-hop song in the history of YouTube and currently has over 242 million views. Killshot broke the Genius record for being the fastest song to hit a million page views and has gone platinum in the US.

Fans had less gripe with the invalidity of MGK’s rebuttal than they did with him giving one at all.

Also, you’re a bit of a dumb bitch to say everyone would fall asleep when the stadium Eminem filled were all chanting “killshot” and literally ASKING for him to perform that shit, he would never have mentioned your irrelevant ass otherwise.

Just DID IT ✔️ pic.twitter.com/5r4QeCZT1n

Next time you play Rap Devil live I wonder what band you will be opening up for.

@machinegunkelly waiting for @Eminem to mention him pic.twitter.com/a9K9B4O13l

I’ll give the last word to Andy Milonakis.

Your diss track was pretty good but the tough guy shit looks corny on you, tbh.

Didn’t think when I woke up today I’d be naming Eminem, MGK, and Andy Milonakis in the same article. The beauty of the internet, I guess.