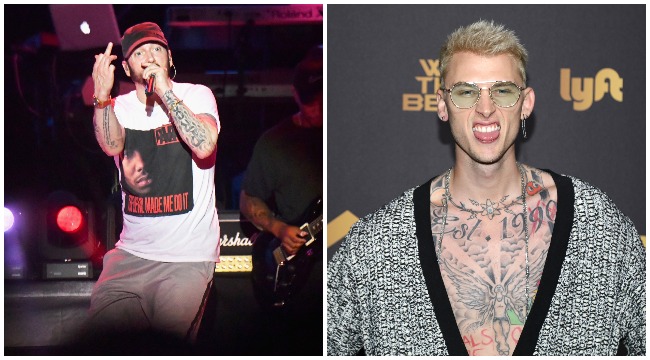 And the beef that nobody asked for continues.

During Eminem’s concert stop Wednesday in Brisbane, Australia, the 46-year-old Detroit rapper was baited into fueling his beef with Machine Gun Kelly, which began in 2012 when MGK sent a tweet calling Eminem’s daughter Hailie “hot as fuck.”

In a video captured by a fan, Eminem was closing out his show when fans chanted at him to perform “Killshot,” which had the largest debut of any hip-hop song in the history of YouTube and currently has over 242 million views.

Instead of indulging his fans, Eminem quipped back:

“I would but I don’t want to give that cocksucker any more fucking light,” he told the crowd. “Make some noise for your-fuckin’-selves and make nothing for MGK.”

MGK has not yet responded at the time of me writing this, but he did engage in a bizarre incident reportedly involving the mere mention of Eminem’s name on Tuesday night in West Hollywood.

The rapper was leaving Ysabel in West Hollywood on Tuesday night when he was stopped by a slew of fans asking for autographs. One fan held out a drum head for him to sign — probably because he plays Tommy Lee in the upcoming Netflix biopic “The Dirt” — and MGK happily signed.

But things took a turn and he went from happy to angry and suddenly started pounding on the drum head, tearing it apart. It’s unclear what set MGK off but someone did ask a question about his feud with Eminem shortly before he went off.

I would drain my bank account to watch these two engage in a boxing match.