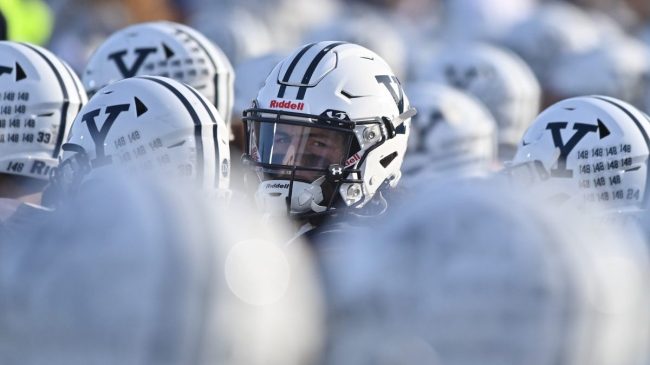 Yale University was once the predominant power in the world of college football.. In fact, the Bulldogs’ 18 recognized national championships are the most of any program in the country.

Countless famous names have come and gone through the historic program. One of those names is Walter Camp, who considered by most to be the “Father of American Football.”

Camp helped develop the game and is credited with creating the idea of a line of scrimmage after adapting rules from English rugby football.

He’s also created with the idea of the snap, the system of downs, the modern scoring system and modern formation rules. It’s safe to say that with Camp, and without Yale, there is no game of football as we know.

The Bulldogs are now honoring that history and the 150th anniversary of their program with some absolutely incredible uniforms.

The 2022 Bulldogs are off to a solid start to the season. Yale has a 2-1 record headed into Saturday’s game against Dartmouth. That game now takes on new meaning after the Bulldogs revealed an incredible one-off uniform commemorating their 150th anniversary.

The Under Armour jerseys are packed with unique features. The laceup front is a throwback to the uniforms worn by Camp from 1876-1881.

The numbers hold his original rules for the game of football.

While the helmets list the names of all 149 former team captains. But that’s not all. There are also two Heisman Trophies in the Yale Y recognizing both Bulldogs’ players who have won the award. In fact, Yale boasts two of the first three Heisman winners. Larry Kelley won the award in 1936, while Clint Frank did the same in 1937.

Football fans are split over the uniforms.

These are awesome unis. https://t.co/jOx5fQYeb0

I've disliked so many of the uniforms that UA has done, but these are amazing. The thought and detail to commemorate such a special occurrence is really impressive. Really cool. https://t.co/h3gzGGo2MZ

There’s no denying the impact Yale has had on college football and the sport as a whole. The Bulldogs may not be the powerhouse that they once were. But it’s clear that people are still paying attention to the historic program. That is unless, of course, you’re Harvard.