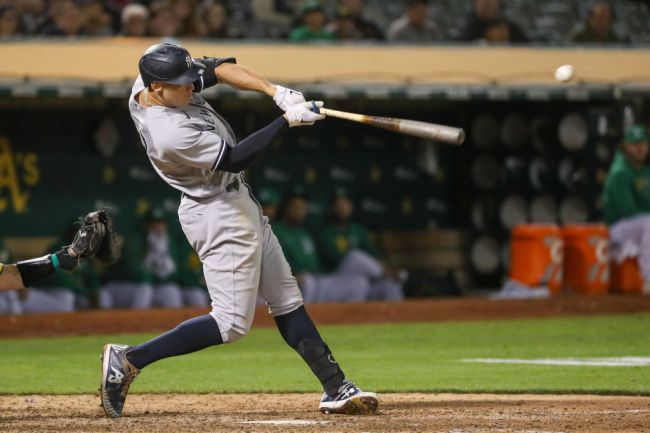 DON’T LET THE NEW YORK YANKEES GET HOT! The Bronx Bombers lived up to their moniker on Friday night and won their 13th-straight game.

New York has won 25 of its last 30 games and the active winning streak is the longest in Major League Baseball this year. Gerritt Cole struck out nine batters in six innings against the A’s to earn the team’s 13th win in a row and reached 200 strikeouts quicker than any player in franchise history in a single season.

Remember when people said that he was bad?!

9 strikeouts tonight and an even 200 this season for @GerritCole45. pic.twitter.com/i9VANqsHgC

Although Cole was impressive, it was the bats that got things going.

Four Yankees went yard in the game and each one was monstrous.

In total, Giancarlo Stanton, Luke Voit, Aaron Judge and Kyle Higashioka hit an astonishing 1,729 feet of home runs. That equates to an average of 432.25 feet per bomb.

Stanton got the party started in the fourth inning.

It’s astonishing how massive the man is. He barely flicked the bat and it was a 472-foot no-doubter. He knew it.

The Yankees are hitting some LONG homers. 😤 pic.twitter.com/7mZK7lfmpZ

With two runners on base in the fifth, it was time for everybody to rise. Judge crushed another tater deep to center.

With a chance to put the game away in the ninth, Higgy joined in on the fun.

Kyle Higashioka trying to stop this from being another nail-biter game! Two-run home run! pic.twitter.com/fceagvUER7

Each of the Yankees’ four home runs went more than 400 feet to total 1,729. That’s more than five football fields. To recap:

After everybody counted them out and put the coaching staff on the hot seat, New York leads the Wild Card race and sit only four games back in the AL East.