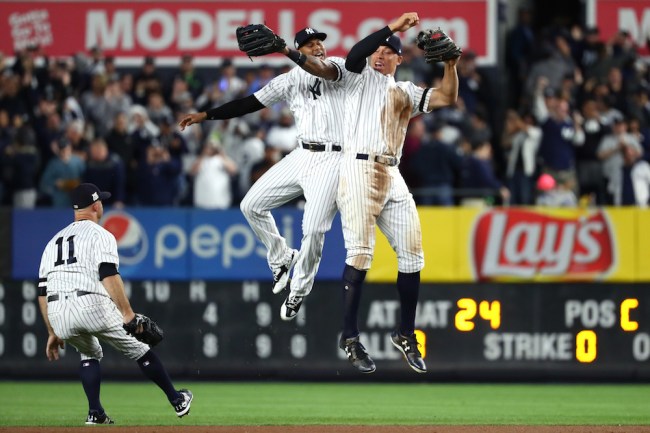 The Evil Empire might once again become the most hated franchise in sports.

On Friday, a federal judge said he plans to unseal a letter allegedly proving that the New York Yankees engaged in a “more serious, sign-stealing scheme” than MLB revealed publicly.

The letter is part of $5 million class-action lawsuit against DraftKings by former user Kristopher Olson and included more than 100 other plaintiffs. The lawsuit was filed against MLB, the Houston Astros, and the Boston Red Sox over the illegal sign-stealing scandal.

The suit alleged that the parties involved were liable for the money DraftKings bettors lost during games in which Houston and Boston may have cheated.

The lawsuit was dismissed in April 2020.

Manfred at the time also said there was “insufficient evidence” to support Boston’s allegation that the Yankees used YES Network cameras to steal its signs.

The Yankees want the letter to remain sealed because it would “cause significant damage to the team’s reputation.”

The judge refutes that statement in a memorandum order filed Friday in the Southern District of New York.

“Embarrassment on the part of MLB or the Yankees about the precise contents of the letter is not particularly weighty,” District Court Judge Jed S. Rakoff wrote.

In his memorandum, Rakoff says Olson argues that the letter proves the Yankees did more than simply improperly using a dugout phone, as Manfred had stated in a press release on Sept. 15, 2017. At the time, Manfred fined the Yankees, and hit the Red Sox with a larger fine for illegally using an Apple Watch to steal and decipher a Yankees catcher’s signs.

Manfred at the time also said there was “insufficient evidence” to support Boston’s allegation that the Yankees used YES Network cameras to steal its signs.

Rakoff is giving the Yankees and MLB until noon on Monday, June 15, to submit a “minimally redacted version” of the letter to protect the “privacy interests” of the people mentioned.

The Yankees requested to delay the unsealing of the letter until next Friday so the team could file an emergency appeal to the Second Circuit Court.