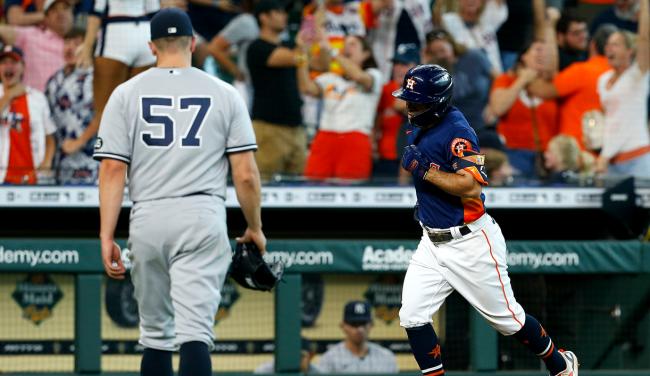 The New York Yankees fought for over a year to keep a letter to the team from Major League Baseball discussing the team’s sign-stealing.

Last Thursday, a judge ruled that the letter would be unsealed unless the Yankees sought a Supreme Court review of the latest ruling within seven days.

The letter was originally set to be released after a U.S. District Court judge dismissed a lawsuit by DraftKings bettors seeking restitution for games in which the Astros and Red Sox may have cheated in 2017, but the Yankees forestalled it for months.

Now, it appears, that will not be necessary as SNY.tv and the Houston Chronicle are among the media outlets who have somehow obtained the letter (*cough*Yankees PR Department*cough) which the Yankees had said would “cause significant damage to the team’s reputation.”

It doesn’t. Not really.

“During our investigation into the Red Sox’s misconduct, [Redacted] informed the Department of Investigations that the Yankees used a similar scheme to that of the Red Sox to decode opposing Clubs’ signs and relay them to the batter when a runner was on second base. [Redacted] — who initially noticed that the Red Sox were using a smartwatch to pass information to their players — admitted to the Department of Investigations that during the 2015 season and the first half of the 2016 season, [Redacted], provided information about opposing Club’s signs to players and members of the coaching staff in the replay room at Yankee Stadium, who then physically relayed the information to the Yankees’ dugout. [Redacted]. also admitted that during that same time period, in certain stadiums on the road where the video room was not proximate to the dugout, used the phone line in the replay room to orally provide real-time information about opposing Club’s signs to Yankee coaches on the bench.”

It goes on to state, “The Yankees’ use of the dugout phone to relay information about an opposing Club’s signs during the 2015 season, and part of the 2016 season, constitutes a material violation of the Replay Review Regulations. By using the phone in the video review room to instantaneously transmit information regarding signs to the dugout in violation of the Regulations, the Yankees were able to provide real-time information to their players regarding an opposing Club’s sign sequence – the same objective of the Red Sox’s scheme that was the subject of the Yankees’ complaint.

“Based on the foregoing, the Yankees are hereby fined $100,000. Please send a check in that amount, made payable to Major League Baseball Charities, to my attention. The money will be used for Hurricane Irma relief.”

This is the bombshell? Really? I'm surprised the Yankees wasted money on lawyers to keep it hidden. Had they let it get published, I wonder how many people would've noticed. What a bunch of nonsense. Boston did worse in 2018 and nobody cares, to say nothing of the Astros.

it’s the same thing the astros did except they ran it through a baserunner instead of communicating for the dugout. have fun trying to spin it!

So it was pretty much as we expected. We can continue trashing the Astros and Red Sox in peace.