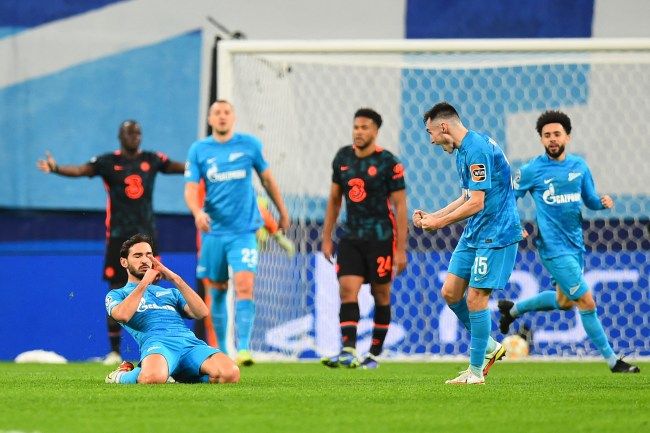 This Chelsea match against Zenit St. Petersburg really snuck up on the world of football. Chelsea has one of the world’s best defenses and Zenit tends to be pretty sturdy on the defensive end when playing in their home stadium. Chelsea only needed a win and Zenit was likely to sit back and defend.

The match had 1-0 Chelsea win written all over it. That was absolutely not what we got today. Instead, we got a back and forth battle that culminated in an incredible goal to secure a draw for the Russian side, which gave Juventus 1st place in Champions League Group H.

Chelsea got off to a fast start with Timo Werner tapping in a goal in the second minute. Nobody would have been surprised if that ended up being enough for Chelsea, but Zenit wasn’t going down without a fight.

They scored 2 goals in 3 minutes shortly before halftime and Chelsea’s keeper, Kepa Arrizabalaga, made a great save to stop them from making it 3 goals in 7 minutes. The teams went to half-time with Zenit ahead 2-1 and Juventus in position to top Group H by 2 points.

Just 17 minutes into the second half, Romelu Lukaku put an equalizer in the net for Chelsea. It would take them 23 more minutes to get what they thought would be the winner. It was once again Timo Werner putting Chelsea ahead when he beat Zenit’s keeper in the 85th minute.

Chelsea seemed like a sure thing to finish the game with a 3-2 win and the top spot in the group, but Zenit had some magic left in them.

In the 4th out of 6 stoppage time minutes, Chelsea cleared a cross out of the box, but it dropped to Zenit’s Magomed Ozdoev at the edge of the box. He unleashed an absolutely unbelievable volley and buried it in the top left corner of the goal.

Check out this 🚀by Zenit's Ozdoev which was the stoppage time equalizer against Chelsea. Chelsea finished second in their #UCL group.

The highlight reel goal tied the match at 3, which is where it would end. The draw saw Chelsea fall just short of winning the group, which will cause them to get a much tougher draw for the round of 16. Zenit finished 3rd and will drop into the Europa League’s knockout stages.