You Have To Watch Bruno Silva Absolutely Lay Out Jordan Wright 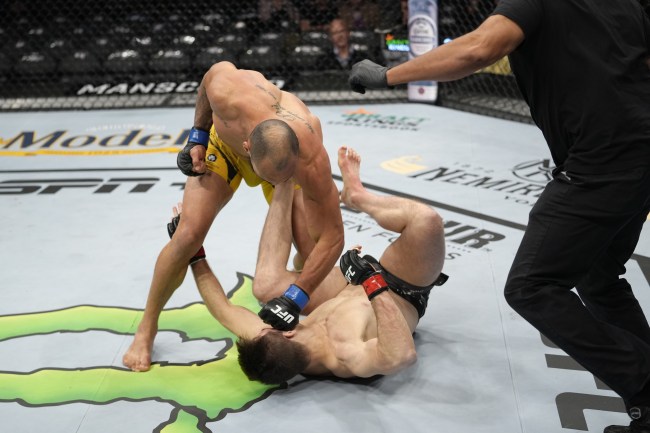 UFC 269 has absolutely delivered tonight. There had already been slick submissions, a couple of impressive decision wins, one scrappy tko win. Now, we can add a savage tko to the list.

Bruno Silva has done one thing and one thing only during his time in the UFC. That one thing is finish fights with his hands. Well, he did it again tonight.

As expected, both Silva and Jordan Wright came out swinging tonight. Wright got the better of the action early on, but all it ever takes for Silva is one shot to change that.

Tonight, it was one big right hand that had Wright wobbling back. Silva quickly followed up and dropped him with another shot. Wright tried to survive by repeatedly reaching for takedowns, but Silva didn’t let up and referee Herb Dean was eventually forced to step in.

The loss drops Wright to 12-2 overall and 2-2 in the UFC. It also stops the momentum he had built with his recent first round finish over Jamie Pickett.

The win keeps Bruno Silva rolling as he continues to mow down his competition in the UFC. He has now finished all 3 of his UFC appearances and his record sits at 22-6.

Silva has shown us a little bit of everything already in his UFC career. He fought off a submission specialist against Wellington Turman. He got the comeback against Andrew Sanchez. Now he blitzed Jordan Wright.

It will be exciting to see if Silva can continue to rack up finishes as he works his way up the middleweight ladder. He certainly hasn’t had any problem doing it so far.