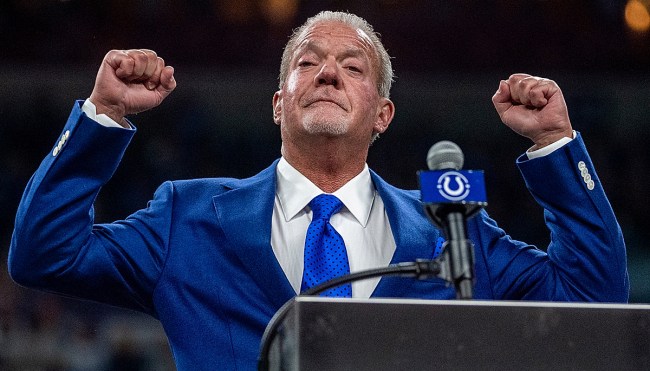 Earlier this year, Pat McAfee described Indianapolis Colts owner Jim Irsay as “the coolest billionaire walking this planet,” and based on a slew of stories that have been shared over the years, it’s hard to argue he’s not a top contender for that crown.

Irsay took over ownership of the Colts in the 1990s at the age of 37 following the death of his father and helped transform the franchise into a perennial contender that eventually won a Super Bowl in 2007. However, an NFL team is far from the only thing he has in an impressive portfolio that includes guitars that once belonged to legendary musicians including Elvis Presley, Jerry Garcia, and Bob Dylan in addition to the manuscript Jack Keourac personally assembled prior to the publication of On the Road.

Before overseeing operations in Indianapolis, Irsay played linebacker at SMU and—based on a video he recently posted on Twitter—also dabbled in competitive weightlifting.

On Tuesday, we were treated to an old clip of a 307-pound Irsay showing off his skills in the Super Heavy Weight Power Lifting Championships, where he managed to squat an impressive 525 pounds while making it look incredibly easy.

When I weighed 307 pounds and squatting 525 pounds in the Super Heavy Weight Power Lifting Championships! 💪🏼 pic.twitter.com/eZyqYk4o7t