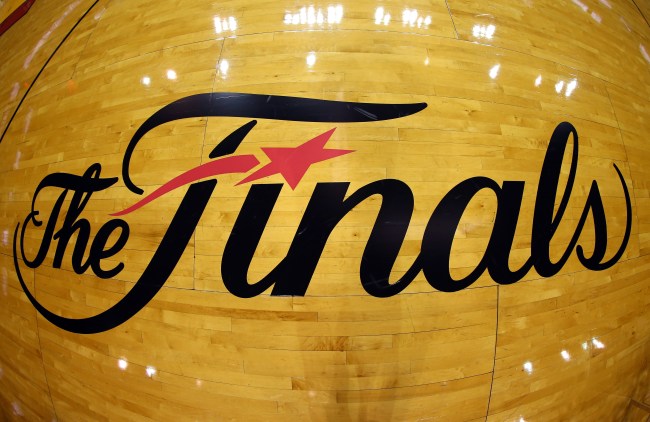 MIAMI, FL - JUNE 20: The NBA Finals logo is seen on the court before Game Seven of the 2013 NBA Finals between the Miami Heat and the San Antonio Spurs at AmericanAirlines Arena on June 20, 2013 in Miami, Florida. NOTE TO USER: User expressly acknowledges and agrees that, by downloading and or using this photograph, User is consenting to the terms and conditions of the Getty Images License Agreement. (Photo by Mike Ehrmann/Getty Images)

A brand awareness campaign is among the ways (exclusive content and user experience are others) that an MVPD, OTT live-streaming service or VOD platform can distinguish itself from the competition and drive growth. Over the last month, rivals YouTube TV and Hulu have announced noteworthy sponsorship transactions (without disclosing financial details) surrounding marquee sporting events. Below is a brief each deal:

It must also be noted that YouTube TV has also landed exclusive streaming rights to Los Angeles FC and Seattle Sounders games.

Howie Long-Short: The success YouTube TV had using live telecasts of the 2017 World Series to drive subscriptions initiated this competition between rivals; but, YouTube TV isn’t the leader in this space. In fact, the size of its subscriber base (300,000+) has the company competing with Hulu (450,000) for a distant 4th place. The oldest service, Sling TV, leads with 2.22 million subscribers; while AT&T’s (T) DirectTV Now comes in second with 1.2 million. Sony’s (SNE) PlayStation Vue is 3rd with +/- 500,000 monthly subscribers.

Octagon SVP, Dan Cohen, Projects FAANG’s Impact on the Next Round of Media Rights Negotiations

There has been a lot of activity within the OTT & MVPD space over the last 30 days (see: ESPN+ launched, Endeavor acquired NueLion and Comcast dropped Big Ten Network “out of market”). To help us gain some perspective on the sports media rights landscape is Dan Cohen, Octagon SVP, Global Media Rights Consulting Division. In Part 2 of a 2 Part interview, Dan discusses a future with rising sports media rights and the likeliness of a FAANG company nabbing broadcasting exclusivity within the next round of rights negotiations.

JWS: As we briefly touched on in Part 1, the OTT & MVPD (multi-channel video programming distributor) space has quickly become crowded. How can those companies best position themselves to acquire cord cutters/cord nevers? Is there one you project to be the “winner”?

Dan: You differentiate yourself with exclusive content, an enjoyable user experience and with a brand awareness campaign; which has created space between YouTube TV and Hulu, Sling, DirecTV Now and the others. Frankly, both cost a lot of money, so the ones with the deepest pockets to strategically spend across those areas are the ones that are going to come out ahead.

JWS: Where do you see the value of the next round of media rights going? Up with the interest of FAANG companies or down with the number of cable subscribers?

Dan: Everyone is talking about how there is cable cutting, cord corrosion and that the media rights bubble is going to burst; but, what no is talking about, is what is on the horizon to grow the business even bigger than it is today. Linear broadcasters have subs and ad sales. With digital broadcasters, it’s subs, ad sales and e-commerce. When watching on a digital screen, albeit your first or second screen, I (the broadcaster) can harness your consumption habits, profile, and other advantageous consumer data, that arm me in a way to connect with you (the customer) like never before. I know more about you than I’ve ever known before and I can appeal and sell directly to you now. The 4th pillar that I believe we are bound to experience next, is the betting piece. In-game betting and the need for live streaming rights will soar. e-Commerce and betting are going to drive incremental revenues and rights fees even higher.

JWS: When can we expect to see the FAANG companies to land exclusive broadcast rights?

Dan: Well, that has already started to happen; but, on a smaller scale. It didn’t really pick up a ton of attention, but Oath (Yahoo!, Verizon, AOL) grabbed exclusive English language media rights to the CONCACAF Champion’s League. Overseas, Amazon has nabbed the ATP rights, in the UK, exclusively. So, you’re starting to see different tech giants enter the media rights market and do more; but, what I don’t think people are talking enough about is survivability.

Content is the lifeblood of NBC, CBS, ESPN, Turner and ABC. They derive revenue from ad sales and subscription fees. Premium sports rights have proven to drive subscriptions, retain subscriptions and generate ad dollars. Having these sports rights are not only integral, but life critical for traditional linear broadcasters. They are not critical for survivability for Facebook and Amazon. Amazon did $156 billion in revenue last year and not a penny of that is tied to sports media rights. So, traditional linear broadcasters are not going down without a fight. They aren’t going to lose these rights, so quickly. They are either going to find a way to work with the FAANG technology companies, as we have seen with Twitter/Amazon and the NFL through CBS/NBC, to share in some of these rights; or they’re going to go down swinging and rights fees are going to keep rising.

Howie Long-Short: Octagon is a subsidiary of the publicly traded Interpublic Group (IPG), a collection of advertising agencies and marketing services companies; and component of the S&P 500. In early February, IPG released Q4 revenue +3.3% (to $2.34 billion) and FY17 revenue +1.8% (to $7.88 billion) figures and noted that the company’s operating margin grew +40 basis points (to 12.4%) in 2017. IPG also reported a 17% YoY increase in the Q4 dividend paid (to $.21) and announced the authorization of a new $300 million repurchase program; actions that “reflect our continuing operating success and financial strength”. Since ’11, the company has returned $3.6 billion to shareholders in the form of dividends and repurchases. IPG, which hopes to grow organic revenue 2-3% in ’18, will report Q1 ‘18 earnings on the morning of April 27th.

Fan Marino: As noted last week, the Pac-12 Network has watched its average subscription fee decline 63% over the last 5 years, while the Big Ten Network increased its per sub fee by 30% over that time. We’ve since heard that Comcast is dropping Big Ten Networks from all but 9 “home markets”. If you’re building a conference network, are you more concerned about the average per sub fee or the number of subscribers?

Dan: You need to serve the fan, especially when you are a new product; it’s about exposure and how you grow your sub base. So, if you are a league, a federation or a conference that is leaving dollars on the table in the short run, in order to prioritize exposure and carriage; you’re going about it the right way, because it’s an arms race. Sports fans have more options now than they have ever had to consume sports content. My advice would be to research, analyze and understand your core fan, your casual fan, your market, your competition and gain a firm understanding of market trends. Then, overcome the challenge of differentiating your property, rollout a unique and thoughtful marketing strategy to acquire the fans’ attention, provide a seamless and intuitive user experience and price accordingly. If you get those steps in line, subscriber growth will be followed by subscriber fee growth.